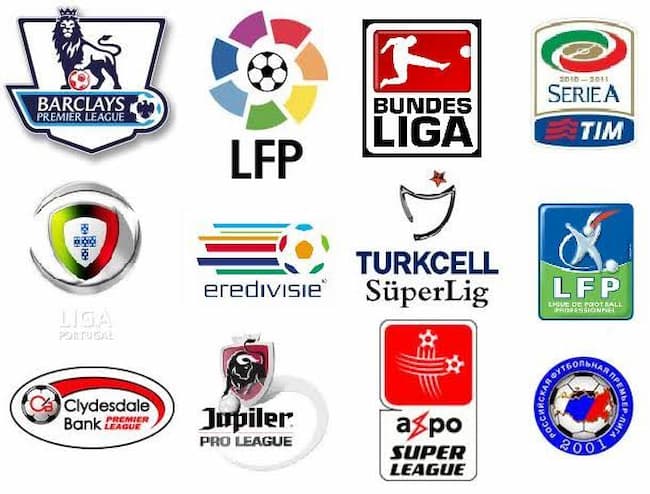 Football is the most prominent sport in the world with its popularity increasing in the world. Check Top 10 Best Football Leagues.

Ranking the best football leagues in the world has been a debate, although some of the leagues have emerged top in both continental and international scenes.

There are several aspects that are important while comparing different leagues in the world.

The style of play, the quality of players, the commercial business of the league, the number of fans coming to see the games in the stadium, the wins of the teams in continental championships like the UEFA Champions League, UEFA Europa League, FIFA Club World Cup, etc.

Top 10 Best Football Leagues, Which Are Statistically Ranking In The World

Check out the list of the top 10 football leagues ranked in the world.

23 teams play 34 matches during MLS’s regular season which runs from March to October with the winner being awarded the Supporter’s Shield.

Through November and December, the 6 highest-placed teams from the Eastern Conference and Western Conference battle head-to-head in the postseason MLS Cup Playoffs that culminate in the championship game, the MLS Cup.

Since it was officially formed back in 1995, Major League Soccer — the American professional soccer league with teams from both the United States and Canada — has been growing steadily in terms of quality and audience.

Great players like Zlatan Ibrahimovic, David Villa, Ashley Cole, André Horta, Bastian Schweinsteiger have brought even more quality, creativeness, and experience to the MLS and things can only get better!

One thing to point out on the negative side, though: offseasons are way too long for soccer fans, especially if their team fails to make it to the playoffs.

Just like Brazil, Argentina’s national football team is also one of the most powerful teams around.

It’s no wonder then that the Argentinian domestic league keeps a countless number of promising stars and is the origin of legendary footballers like Diego Armando Maradona, Gabriel Batistuta, Di Stefano, Kun Agüero, Di María, and, of course, Lionel Messi.

Boca Juniors and River Plate bring a ton of rivalry to the championship making it even more interesting and… truly insane!

Attending a live Primera División match is undoubtedly a lifetime experience. The boiling and, many times, the dangerous atmosphere is definitely hard to forget.

Brazil has always been one of the strongest countries when it comes to football. Its national team is the most successful squad at FIFA World Cup tournaments and the only one to have won 5 World Cup titles.

Recent venues built for the 2014 World Cup dramatically improved the quality of the games both for spectators and players.

You’d be right to expect great goals and plays stars with magic on their feet and good matches in the Brasileirao, including new promising footballers.

There’s something about the mentality of club boards that needs to be addressed, though. Coaches rarely start and finish a full season in the same club. Some only last for a few weeks before being sacked.

Since there are a lot of games to be played (across many different competitions), Brazilian teams don’t have enough time for proper training and to improve their overall game tactics.

This certainly doesn’t make managers’ lives any easier which, in turn, lessens the competitiveness of the league itself.

The Eredivisie consists of 18 teams. Each team plays each other twice during the season, once at home and once away.

At the end of each season, the two clubs at the bottom are automatically relegated to the second level of the Dutch league system.

The champions and the runner-up of the second division are promoted to the first division.

Ajax has won the won titles, with 35 national titles. PSV Eindhoven is next with 24 titles, and Feyenoord follows with 15. These clubs are known as “The Big Three”.

Ligue 1 was inaugurated on 11 September 1932. Although, under the name National before switching to Division 1 after a year of existence.

It continued to operate under that name until 2002 when it adopted its current name. AS Saint-Étienne is the most successful club with ten league titles in France.

While Olympique Lyonnais is the club that has won the most consecutive titles (seven between 2002 and 2008). With the presence of 71 seasons in Ligue 1, Olympique de Marseille holds the record for most seasons among the elite. While Paris Saint-Germain holds the league record for longevity with 47 consecutive seasons.

Seasons run from August to May. Clubs play two matches against each of the other teams in the league – one home and one away.

Also totaling 38 matches over the course of the season. As of 2018, Ligue 1 is one of the top national leagues just behind England’s Premier League, Spain’s La Liga, Germany’s Bundesliga, and Italy’s Serie A.

The Primeira Liga has increased its reputation in recent years. Also occupying the fifth place of UEFA’s national league ranking, as of 2021.

Also, passing the French Ligue 1, one of the historical “big five” European leagues, for the first time since 1990. The Primeira Liga also reached a world ranking of fourth according to IFFHS’s 2011 ranking.

When it was changed to its current naming. Over 70 teams have competed in the Primeira Liga, but only five have been crowned champions.

The Bundesliga was founded in 1962 in Dortmund and the first season started in 1963. The structure and organization of the Bundesliga, along with Germany’s other football leagues, have undergone frequent changes.

The Bundesliga was founded by the Deutscher Football-Bund . The Bundesliga is the number one football league in the world in terms of average attendance; out of all sports.

Fifty-six clubs have competed in the Bundesliga since its founding. Bayern Munich has won the title 30 times, the most among Bundesliga clubs. However, the Bundesliga has seen other champions.

Along with Borussia Dortmund, Hamburger SV, Werder Bremen, Borussia Monchengladbach, and VfB Stuttgart most prominent among them.

The Bundesliga is one of the top national leagues. Also ranked fourth in Europe according to UEFA’s league coefficient ranking for the 2020–21 season. That is based on performances in European competitions over the past five seasons.

The Serie A of Italy comes at third place in our list of UEFA rankings. In its current format, the Italian Football Championship was revised from having regional and interregional rounds to a single-tier league from the 1929–30 season onwards.

The championship titles won before 1929 are officially recognized by FIGC with the same weighting as titles that were subsequently awarded.

Similarly. The 1945–46 season, when the round-robin was suspended and the league was played over two geographical groups due to the ravages of WWII. And is not statistically considered, even if its title is fully official.

The league hosts three of the world’s most famous clubs as Juventus, AC Milan, and Inter Milan, all founding members of the G-14. A group that represented the largest and most prestigious European football clubs from 2000 to 2008.

Along with the first two also being founding members of its successive organization, the European Club Association (ECA). The club is also the only one in the world to have won all possible official confederation competitions.

La Liga comes at the second spot of UEFA rankings in our list. A total of 62 teams have competed in La Liga since its inception. Nine teams have crowns champions, with Real Madrid winning the title a record 34 times and Barcelona 26 times.

During the 1940s Valencia, Atlético Madrid, and Barcelona emerged as the strongest clubs, winning several titles. Real Madrid and Barcelona dominated the championship in the 1950s, each winning four La Liga titles during the decade.

During the 1980s and 1990s, Real Madrid was prominent in La Liga. But the Basque clubs of Athletic Club and Real Sociedad had their share of success. Moreover, each winning two Liga titles.

Contested by 20 clubs, it operates on a system of promotion and relegation with the English Football League (EFL). Seasons run from August to May with each team playing 38 matches.

The competition was founded as the FA Premier League on 20 February 1992 following the decision of clubs in the Football League First Division to break away from the Football League, founded in 1888, and take advantage of a lucrative television rights sale to Sky.

From 2019-20, the league’s accumulated television rights deals were worth around £3.1 billion a year, with Sky and BT Group securing the domestic rights to broadcast 128 and 32 games respectively.

The Premier League is a corporation where chief executive Richard Masters is responsible for its management, whilst the member clubs act as shareholders.

Clubs were apportioning central payment revenues of £2.4 billion in 2016–17, with a further £343 million in solidarity payments to English Football League (EFL) clubs.

The Premier League is the most-watched sports league in the world, broadcast in 212 territories to 643 million homes and a potential TV audience of 4.7 billion people. For the 2018–19 season average Premier League match attendance was 38,181.