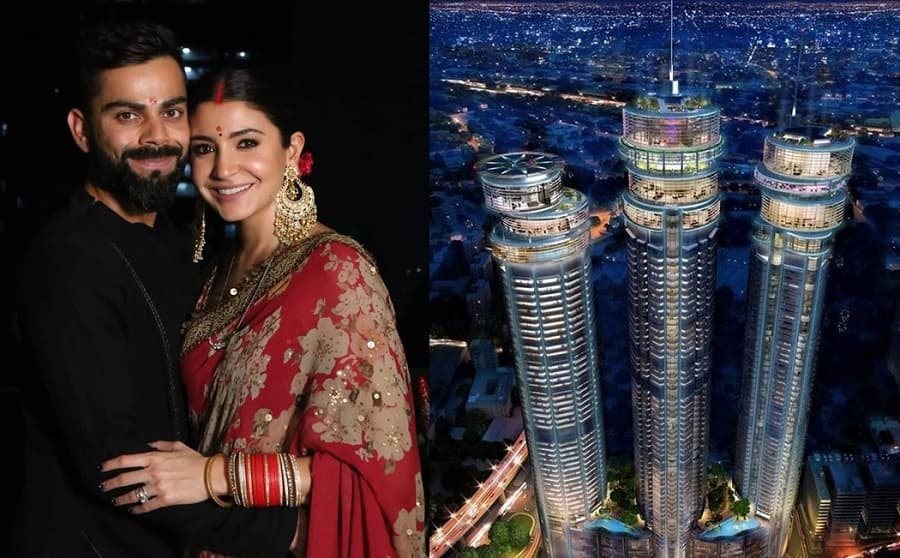 Virat Kohli is an Indian cricketer and current captain of the India National Team. He is one of the best contemporary batsmen in the world, he plays for Delhi in domestic cricket and Royal Challengers Bangalore in the Indian Premium League (IPL). Virat is married to Bollywood actress Anushka Sharma and they both are the power couple love by millions of people. So check below the 10 Most expensive assets owned by Virat Kohli.

Kohli is the fourth most successful captain in international cricket, he is one of the richest cricketers in the world as his Net-worth is being around 1000 crore. Also, he is one of the most active and youngest cricketers with 128 victories in 200 matches. Being national team captain they receive some hefty amount not only that, Virat is also running some business under his name. So now let’s take a look at the 10 most expensive assets owned by Virat Kholi.

As we are aware Kholi is born and brought up in Delhi, so it’s pretty obvious he has made a mansion for himself over there his own Bungalow the property is worth around INR 80 crore but he moved into his residence with his family in 2015 before marrying Anushka. Virat has click lots of pictures in his mansion and he visits his hometown whenever he wants.

All thanks to social media power where you can have a small glimpse of their luxury house after marriage Virat and Anushka shifted to his Mumbai flat which is in Worli, their house is on 35th floor with a view of Arabian Sea and they also have 4 rooms in it one room also have a gym where they love to workout to buy such property one should have a hefty amount of bank balance.

Kholi also loves one of the favorite sports of all that is Football and he has flaunted his football skills time he might not be very perfect in it but he owns his football club in Fc Goa. Constantly he is boosting the morale of the Goa players through the help of social media as nowadays people are more active on it and it has powers. Whereas last year in February Month Fc Goa became the first Indian Football Club to get qualify for their AFC Champions League.

As we know Kholi loves to style himself he is a style icon and his fashion is been inspiring to many of them, he has invested 13.2 crores in the very famous brand known as Wrogn where there are various styles and quality shirts, denim, footwear, etc. The collection of this label is available on Myntra and Flipkart. Virat has also done some advertisements to support the brand.

As we get to know Virat is having many properties one of his houses is in Versova, Mumbai which is of 3BHK flat worth Rs. 10 crores but he has been a shift to his another flat and he is no more often seen in his Versova flat. Also, he spends a considerable amount of time in his flat the couple also have same apartments in the same building.

Bentley Continental GT one of the luxurious car, the car is registered in the name of Virat’s brother name Vikas and Kholi is the second owner of the car, the car mainly remains in Delhi and he enjoys the ride whenever he visits Delhi the car has modern design with advance technology he enjoys automobile ride on a couple of occasions.

Bently Flying is an automobile collection he got this car in 2019 and it has five seats, It has petrol engine of 3993 CC and 5950 CC. Earlier the couple Virat and Anushka were snap in this car while visiting the hospital the royal car has been a feature in the background.

Range Rover was welcome in his family in 2018, the car is around 2.7 Crore it has some amazing features as it can accelerate from 0 to 100 in just 8.5 seconds. Also, his car number is registered under his jersey number which is HR 26 CJ 1818, he enjoys the ride and often seen in it whereas his wife Anushka also have the same SUV of her own and this car is a park in Mumbai.

Virat has Audi RS5 the top model which is worth 1.10 cr. Also, Virat is the first owner to buy the top model of Audi in India the car was launched in the year 2018 and the richest cricketer got his first keys he also poses in front of the car it seems one of the most cherished vehicles.

Virat has one of the expensive watches, whereas he owns the super stylish Rolex Daytona which comes approximately around 87 Lakh. The Daytona is made up of ever which compromises a black lacquer dial, pink gold crystals sub-dials 56 diamonds set into lugs well Kholi time is a little bit expensive he is the proud owner of it and he has flaunted his watch on many occasions whereas he has also shared some photo and video on social media.