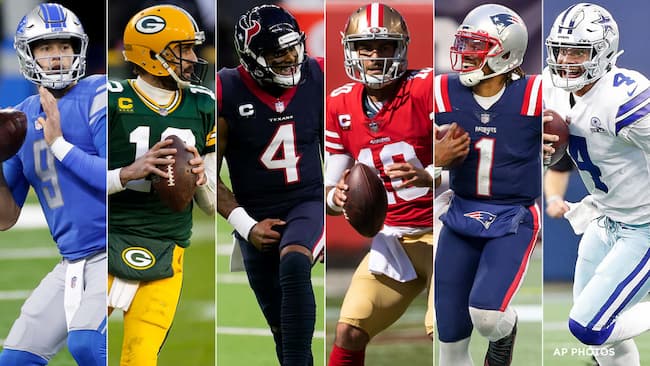 Quarterback. It’s by far the most important position on a football. The quarterback generally determines the success of an NFL team. Check 10 Oldest Active Or Inactive QB To Play In The NFL

With the 2021 Draft ushering in a wave of new NFL quarterbacks, all young and light on their feet, it makes you wonder, who are the oldest quarterbacks in the league?

10 Oldest Active Or Inactive QB To Play In The NFL

Blanda holds the record for the oldest quarterback to ever play the game of football. When he retired he was a whopping 48 years old!

Nesser started playing football back in 1909, a time before the NFL even existed. However, he’s still considered one of the pioneers of the game, along with his six brothers.

Nesser played for 12 years on the Columbus Panhandlers. The Panhandlers are considered to be the first NFL team ever.

DeBerg played in the NFL for 17 years, between 1977 and 1993, and then once more in 1998. DeBerg was the quarterback for a multitude of teams over his career.

Testaverde had a similar career to DeBerg as he bounced around the league during his 21 years of employment. He played between 1987 and 2007.

Moon had a successful career during his 16 years in the league. He played between 1984 and 2000 and enjoyed a great deal of success, being inducted into the Pro Football Hall of Fame.

Brady is not one of the oldest quarterbacks ever, but also perhaps the greatest ever to play the game. His motor keeps turning, and there doesn’t seem to be anything slowing him down.

Brady spent the first 20 years of his career (from 2000 to 2019) before switching over to the Tampa Bay Buccaneers last year. He won his seventh title with them, and it doesn’t seem like he has plans for retiring anytime soon. Brady is the oldest active quarterback on this list.

Flutie is another quarterback who enjoyed a great deal of success during his time in the NFL. He played for 19 years between 1986 and 2005.

Morrall’s NFL career dates back to the early years as well, as he played between 1956 and 1976 for 21 years. While Morrall never became a true starting-caliber quarterback, he is widely recognized as the best backup quarterback.

Brees would be the only other active quarterback to make this list, but he announced his retirement in the 2021 offseason. Brees is a lock for the Hall Of Fame and owns several passing records along with a Super Bowl title.

Favre is another all-time great quarterback to make the list. In his prime, Favre was known as a gunslinger, a poised passer with a big arm.