A defeat for Shiva Thapa: Crashes out in Round 16 – Day 3 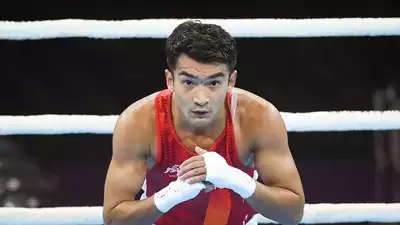 A defeat for Shiva Thapa: Crashes out in Round 16 – Day 3

Who is Shiva Thapa?

Shiva Thapa was born on the 8th of December 1993. He is an Indian boxer. Shiva Thapa participated in the London Olympics in 2012. This made him the youngest Indian boxer to qualify for the Olympics. He is the third Indian to acquire gold at the Asian Games. He is the third Indian boxer to win a medal at the AIBA World Boxing Championships. Thapa is a member of the International Boxing Association (amateur) Athletes Committee.

He had started brightly and outperformed his opponent in the first round.

In the third and final round, Thapa had no option left but to defend. His opponent took him by surprise and had an offensive approach. In the end, Lynch emerged victorious in the contest.

Overconfidence and lack of focus cost Thapa in the two rounds. Scotland’s Reese used his height and long reach to land clear punches.

Eventually, the result turned in favor of Lynch. He proved to be the far better boxer in the contest. He deserved the win.

Bronze medal – He secured third place in 2015 in Doha – Bantamweight

Gold medal – He secured first place in 2013 in Amman – Bantamweight

Silver medal – He secured second place in 2017 in Tashkent – Lightweight

Bronze medal – He secured third place in 2019 in Bangkok – Lightweight

Bronze medal – He secured third place in 2015 in Bangkok – Bantamweight