In the third round of the FA Cup, Bristol City will play Swansea City at Ashton Gate on Sunday, January 8.

After a decent start to the season, the hosts have had a mostly bad season. In their most recent match, Bristol and Coventry City played to a 1-1 draw. The Robins ended a 17-game goal drought with an equalizer from Antoine Semenyo midway through the first half.

Last season, Bristol lost 1-0 to Fulham to reach this stage of the FA Cup, and they will hope for better luck this time around.

Swansea, on the other hand, has also had problems this season but still thinks they can make the playoffs.

The Swans lost 2-1 to league leaders Burnley in their first game of the new year after finishing 2022 on a high with a 4-0 victory over Watford. In the first 25 minutes, they gave up two stunning goals, but Oliver Cooper made it 2-1.

Bristol has not won in four games and has only won one of their last 11 competitive games. They may struggle here, as they have lost five of their last seven home games.

Swansea, on the other hand, has only won one of their last ten competitive outings and has now lost three of their last five games. They could see this Cup tie decided in a replay given their recent road struggles.

Bristol and Swansea will play in their 75th meeting on Sunday. While the visitors have won 23 of their previous games, the hosts have won 29. The two teams have played 22 times to a draw, with their most recent encounter ending 1-1.

In their last three meetings, the visitors have not lost. In their last six games in this matchup, the hosts have not kept a clean sheet. This season, the Robins have scored 32 league goals, the second most of any team in the Championship’s bottom half.

• When Bristol City is ahead by one goal at home, they win 61% of the time.

• In meetings between Bristol City and Swansea City, the average number of goals scored in the first half is 0.6.

• Their previous meeting ended in a tie. 1) Swansea City has a 32% halftime advantage over Bristol City’s 37%.

• In meetings between Bristol City and Swansea City, the average number of goals scored is 2.6.

Bristol City vs Swansea Where to Watch : 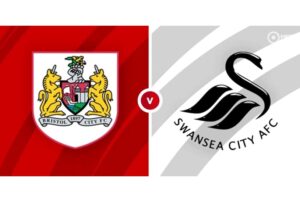