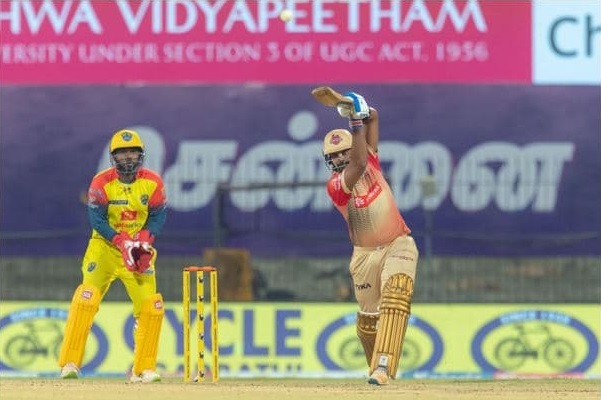 Sathish, the veteran of many battles, put his hand up when it mattered most by smashing 64 off 32 balls (4 fours, 4 sixes) to guide the defending champions to 159 for 7 wickets in 20 overs.

Chepauk, who were struggling at 44-4 in the 9th over was spurred by Sathish and left-hander Ravisrinivasan Sai Kishore’s (31 off 27 balls, 2 fours, 1 six) rollicking partnership of 68 runs off 41 balls. The 25-year-old Sai Kishore was content playing second fiddle to the 40-year-old Sathish, whose contribution to the alliance was worth 46.

Kovai Kings justified their decision to bowl after captain Musa Shahrukh Khan won the toss when they claimed the top four Chepauk batsmen cheaply. Left-arm spinner N Selva Kumaran (2-11) did most of the damage claiming the prized scalps of opener Narayan Jagadeesan (9) and all-rounder Jaganath Srinivas (7).

Just when it seemed Kovai Kings were tightening the screws, Sathish broke the shackles. That Chepauk added 115 in 11 overs is an indication of the impact made by Sathish.