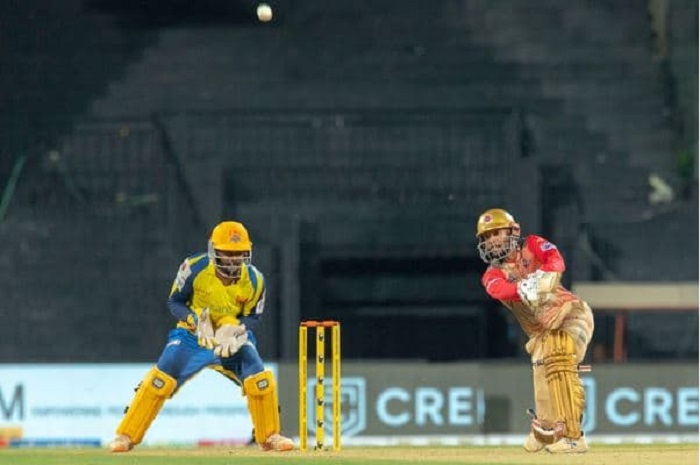 The defending champions did everything right from the time captain Kaushik Gandhi won the toss and decided to field. His bowlers, led by the impressive left-arm spinner Ravisrinivasan Sai Kishore left Dindigul in a spin, dismissing them for 103 in 20 overs. Gandhi then led the charge during the chase with a superb 53 off 41 balls (7 fours, 1 six) as Chepauk raced to the target in 16 overs. He was particularly severe on left-arm spinner Munnusamy Silambarasan smashing

four fours and a six in succession, 22 runs in all, off his second over.

Gandhi was also involved in a 69-run alliance off 57 balls for the first wicket with Narayan Jagadeesan (21 off 27 balls) that set Chepauk on course. They finished on 106-2 with Uthirasamy Sasidev (13 not out off 13 balls) finishing the game with six-over deep midwicket off pacer Vivek Rajendran.

The two-time champions will have another crack at the title on Independence Day when they take on Ruby Trichy Warriors in the final. Earlier, Sai Kishore was the wrecker-in-chief claiming 3 wickets for 14 runs to swell his count this season to 11 wickets and his overall tally to 54 wickets. The 23-year-old lanky bowler’s victims included the dangerous duo of Mani Bharathy (0) and Vivek Raj (7). The other left-arm spinners Manimaran Siddharth (1-17), who opened the

attack and Ramadoss Alexandar (2-3) also did a commendable job.

Sai Kishore believes Chepauk’s big match experience came in handy. “It helps because a little experience of playing these games helps you to stay calm and do the basics right. So that was what we did,” he said, adding, “I’m very eager to play in the finals.”

The worst fears came true for Dindigul as no batsman could lend a helping hand to their captain C Hari Nishaanth, who played a lone hand. It appeared as if Hari Nishaanth was batting on a different wicket as he creamed 56 runs off 46 runs (2 fours, 4 sixes) to rise to the top of the tournament’s batting charts by increasing his tally to 368 runs, going past Lyca Kovai Kings’ Bhardwaj Sai Sudharsan (358 runs). It was also his 11th fifty in the tournament.

Once Hari Nishaanth was dismissed in the 14th over, the rest of the side caved in with five wickets falling for the addition of 20 runs.

That only two other batsmen — debutant Ramachandran Vimal Khumar (11) and Munnusamy Silambarasan (11 not out) — could reach double figures tells the story of Dindigul batting.

Hari Nishaanth conceded the batting did not go to plan. “We were not worried about the toss but the way we batted, especially the three wickets, myself, Srinivasan, and Vivek Raj, we gave our wickets away after hitting a six so that was not good for our plans. Nothing went our way,” he said. The Dindigul captain, however, lauded his team for their effort in the tournament and hoped they will find a way to get the CSG monkey off their backs. “I enjoyed myself being captain of DD although it was an added responsibility I learned a lot, especially from S Badrinath

(head coach), the man who has shown his class in all three formats of the game. Hard luck but I can say that we played like champions. Only thing is that every year we are stumped by the CSG challenge so we have to learn faster, pull up our socks, and get ready for the big game. We will come back stronger,” he said.

Upstox Most Valuable Player of the Match: Kaushik Gandhi