Commonwealth Games 2022: The Entry of Cricket 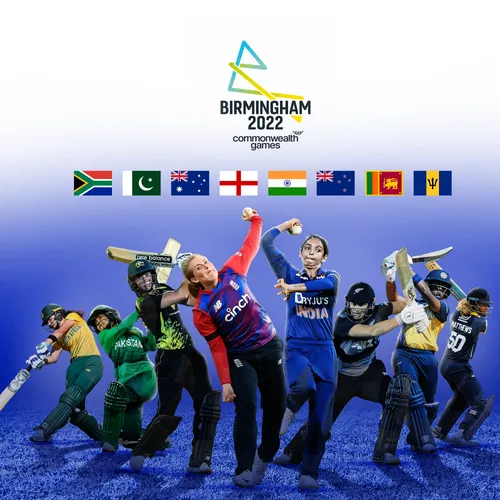 The 1998 tournament hosted in Kuala Lumpur was a 50-over competition for men. The event hosted in Birmingham is Twenty20 for women only.

The unbeatable Australian team will arrive as huge favorites to win the gold medal. The hosts are the most likely to stop them from winning.

How did cricket reach here?

After a joint bid by the International Cricket Council and the England and Wales Cricket Board, cricket was included in the Commonwealth Games this year.

How is it going to work?

These 8 teams are split into two groups of four members each. The top two teams from each group will advance to the semi-finals.

All of the matches are set to be held at Edgbaston. This event will stage women’s international cricket for the first time since 2014.

There will be two matches per day, at two timings – 11:00 BST and 18:00, from the 29th of July. Australia and India are set to get the tournament underway. England will begin their campaign against Sri Lanka in the late game on 30 July.

The final is on the 7th of August.

Australia is a juggernaut and undoubtedly the best women’s cricket team in the world. It is probably the strongest international sports team on the planet.

They retained the Ashes with a series win over England. Then they won the World Cup by defeating their old enemies in the final.

The T20 format is the format where they are most dominant. They have won five of the seven T20 World Cups, including the last two.

The Captain, Meg Lanning, says that her team will target completing the “grand slam” at the Commonwealths. She plans to bag a gold medal and win every major title in the women’s game.

Hooda congratulates players for winning medals for India in…

Their opponents could be hopeful from the departure of Australia’s head coach Matthew Mott. Interim coach Shelley Nitschke is set to lead Australia at a global event for the first time.

The tournament expects a strong showing by the hosts. A new-look England side is targeting a place in the final at least.

These changes in the squad look to have energized England’s T20 cricket. The team outplayed South Africa in taking a comprehensive clean sweep of a three-match series.

There is a state of concern over the fitness of inspirational skipper Knight. She had already missed two of the previous matches with a hip problem.

There is a sense of excitement among the England squad at the prospect of taking part in the Commonwealths. They are not participating just for the unique opportunity to win a gold medal. They are excited about the whole experience of the Games. They look forward to mingling with competitors from other sports, experiencing the athletes’ village, and taking part in the opening and closing ceremonies.

West Indies has a fine history in T20 cricket. They are the only team other than Australia and England to have won the World Cup. In the Commonwealths, the West Indies are represented by their individual nations. Barbados makes its entry from the Caribbean.

They include star players like Hayley Matthews and Deandra Dottin.

New Zealand is in the transition stage after a poor home World Cup. South Africa has taken a blow due to the retirement of destructive opener Lizelle Lee. Even the all-rounder Marizanne Kapp is unavailable.

A lot of attention is on the Indian team that continues to hunt for its first global title.

They have the batting talent and bowling skills to perform well. The problem is very often they are blighted by inconsistency.

The Players to look out for