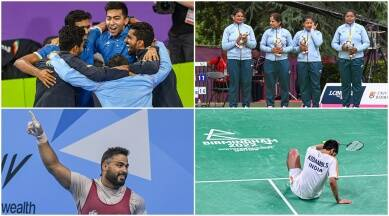 Indian Women’s Fours team in Lawn Bowls won a gold medal. They defeated South Africa 17-10 in the final. The members are Lovely Choubey, Pinki, Nayanmoni Saikia, and Rupa Rani Tirkey. It is India’s first gold medal ever in lawn bowls.

The Indian men’s table tennis team won a gold medal. They defeated Singapore 3-1 in the final. Their victory marked India’s 5th gold medal in the games.

The Indian Badminton Mixed Team faced Malaysia in the finals. The team settled with a silver medal. The score rested at 3-1.

India clinched a gold medal in Lawn Bowls CWG 2022. The team won by 17-19 against South Africa.

On Monday, the Women’s Fours assured the country of its maiden medal. They emerged victorious with a superb 16-13 win against New Zealand. The semi-finals took place at Victoria Park in Royal Leamington Spa.

The Indian Fours had reached the semifinals after beating Norfolk Island 17-9 in the quarterfinals. They secured victory in the final with a superb effort in the 15th and final end.

The higher-seeded New Zealand took an early lead. The team caught up with India at the dusk of the 13th end. The Kiwis held a narrow one-shot lead with points 13-12. But the Indians made the last bowls count and grabbed four points. This fetched them their place in the final.

The Indian TT team beat Singapore 3-1 in the finals. They clinched a gold medal at the National Exhibition Centre.

With this, the Indian team defended its title. Previously, they had won the gold in 2018. The CWG 2018 event was held at Gold Coast. They won with 3-1 over Nigeria in the final.

The Indian table tennis pair raced to a 6-3 lead. But they faced trouble from the Singaporean duo as the game progressed.

The right and left combination of Izaac Quek Yong and Pang Yew En Koen regrouped and took the next four points. They took the lead. However, Harmeet and Sathiyan mixed the flicks and top spins and made a comeback. The Indian team gave away two game points. The Indian TT team held on and won the crucial game.

The Indian pair became positive from thereon. They made sure the momentum did not slip from them. They played the second and third games with ease.

Sharath is ranked 39th. He was taken aback by Clarence Chew’s pace in the first game. But he used his forehand power and some luck to win the next.

Clarence Chew dominated Sharath Kamal with diagonal and down-the-line shots. The 40-year-old Indian led 4-1 in the fourth game. But he failed to win the long rallies. This gave Singapore an opening.

Sathiyan improved his intensity to win the halves’ game. The Singaporean had better pitching. He easily took the next game. Sathiyan studies Pang Yew En Koen’s top spins. He then went on the offensive and pulled his team back into the lead.

Harmeet Desai played his only second singles match at Birmingham in 2022. He faced difficulty against Zhe Yu Clarence Chew. Chew had already beaten Sharath Kamal in the second match.

The performances of the Women’s Four team in Lawn Bowls and the Indian Men’s TT team helped India to win back-to-back golds in Commonwealth Games 2022. Day 5 was lucky for India as the country won four medals – 2 gold medals and 2 silver medals. The country stands with five gold medals, five silver medals, and three bronze medals at the end of day 5.

The ground has been broken for a new multi-sports field