New Zealand was 61-1 in the eighth over of the second innings and chasing 138 to win when the test was called off early due to low light.

After Pakistan’s bold declaration had given New Zealand a chance to win, a thrilling final session of cricket on Friday in the drawn first Test was ended by poor visibility.

When the test was called off early due to low light, New Zealand was 61-1 in the eighth over of the second innings and chasing 138 to win.

After tea, Pakistan started its second innings with a lead of 249-7, or 75 runs, and New Zealand leg-spinner Ish Sodhi (6-86) threatened to position his team for victory.

Saud Shakeel, a left-given pitcher, pitched a scoreless 55 innings with a lot of help from Mohammad Wasim (43) and Mir Hamza (3 hits). Pakistan captain Babar Azam called the score 311-8 late in the final session because of how well they played, which caught the visitors off guard.

In the first innings, when New Zealand declared at 612-9, it was a tempting target, so the visitors went after it. Devon Conway’s unbeaten score of 18 and Tom Latham’s unbeaten score of 35 could have prevented Pakistan from losing its fifth home Test in a row. 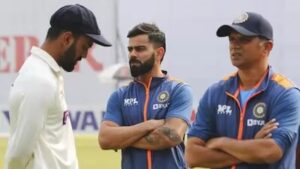