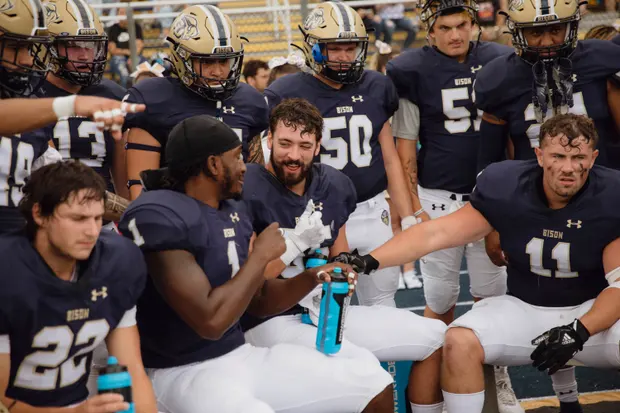 The game is like any other fall Saturday at a tiny US institution. After plays, players bump chests. Cheerleaders cheer during timeouts. A visiting supporter swears over the crowd’s enthusiasm.

John Scarboro speaks with a coach using ASL instead of a headset (ASL). The cheerleading team performs the national anthem in ASL before kickoff.

Gallaudet is the only liberal arts university dedicated to deaf and hard of hearing students. Gallaudet was founded during Abraham Lincoln’s presidency and helped establish (American) football. In 1894, Gallaudet quarterback Paul Hubbard surrounded his teammates near the line of scrimmage to discuss ASL play calls.

Hence, the huddle. Gallaudet has the strongest claim to the huddle’s genesis. Even legendary Illinois coach Robert Zuppke, sometimes credited with inventing the huddle, said he got the idea from a deaf team.

Gallaudet’s legacy includes sporting innovation. The university has fostered a community where deafness is a given for more than 150 years. Deafness terminology is important to know.

Even using ‘deaf’ with a lowercase ‘d’ may upset others. Whether to capitalize “deaf” remains a controversy in the deaf/Deaf community.

Scarboro grew up with ASL and played high school football for Texas School for the Deaf (he has fond recollections of “Friday night lights”).

Laron Thomas, who grew up in Florida, says, “I was the only deaf person in all my mainstream schools… [coming to Gallaudet] was a major adjustment.” My coaches, teammates, and trainers all spoke ASL. That’s what made me so comfortable here, and it became a second home.”

Deafness and “disability” have intricate relationships. Deafness is a disability under the ADA. Many deaf people consider deafness as a physical feature, like height or skin colour, that fosters its own society through ASL (a grammatically distinct language in its own right, not simply a visual interpretation of English).

Gallaudet feels like a distinct language and society for those not fluent in ASL. A Starbucks off-campus conducts business solely in ASL.

This impression includes the (good-natured but true) shame you experience when you can’t ask fundamental questions in the local tongue. On Gallaudet’s campus, hearing people should adapt to deaf conventions, not the other way around.

Gallaudet football players insist they’re not crippled. Mitch Dolinar, who is hard of hearing, says he feels “normal” on the field. “I’m disabled-free. I’m not crippled.”

Linebacker Stefan Anderson: “We can do anything.” “People say ‘deaf people can’t drive, we can’t do this,’ yet we can. Anderson knows what he’s talking about; he was chosen first-team all-defense in his conference last season.

Deafness has sporting benefits and expenses like any other feature. A lack of music during pregame warmups throws visiting teams off.

Some gamers believe deafness has in-game benefits beyond environmental ones. Rodney Burford Jr. is a linebacker. “You can hear me slander. I can’t hear you when you talk trash, so I’m in your head.”

Three years ago, a referee neglected to tell a rushing Gallaudet defender that the play was dead.

Gallaudet’s defender was trying to outmanoeuvre the other team’s offensive line when he tackled the quarterback after the play was over, resulting in a personal foul. Goldstein: “It was fourth-and-goal on the goalline.”

The refs gave a penalty before halftime, and the other team scored on the next play. Last-second field goal cost us the game.

Bison are rising despite such mix-ups. Five straight wins started last season, but it ended with three losses. Players and coaches want to win the conference this year. The Bison lost their season opener versus Waynesburg University.

They swiftly returned to winning form in their second game, beating Greensboro College 31-14. “We swung. Burford stated, “We hit you first before you hit us.” “They hit us in the fourth quarter, but we were ahead. We used backups.”

Burford made a big tackle and was given a plastic necklace with a Pearl Milling Company syrup bottle as a pendant (a visual pun on the opposing player having just been pancaked). Lineman Dolinar fired a spectacular touchdown pass after disguising as a field goal holder.

Anderson, who had a sack before halftime, agreed. Because Waynesburg and Greensboro aren’t in Gallaudet’s league, the squad can still win.

The short collegiate sports seasons give every team a Last Dance feel, and this year is no exception. Anderson and Burford have played together since high school and work well together on the field.

Anderson asks, “What about Rodney?” “He’s my brother, he’s family… Separation will be difficult. We’ve been through a lot.” Anderson’s emotional. “It’s emotionally taxing”

Gallaudet graduates must move from a community where deafness is the norm to a mainstream society where many are unfamiliar with deaf/Deaf culture and ASL. Hearing people may assist make such adjustments easier for deaf people (besides going to a Bison game, of course).

Anderson suggests learning sign language. “Some rudimentary signs, a hello or something… You’ll meet deaf individuals, so be prepared. It’s worth it.”