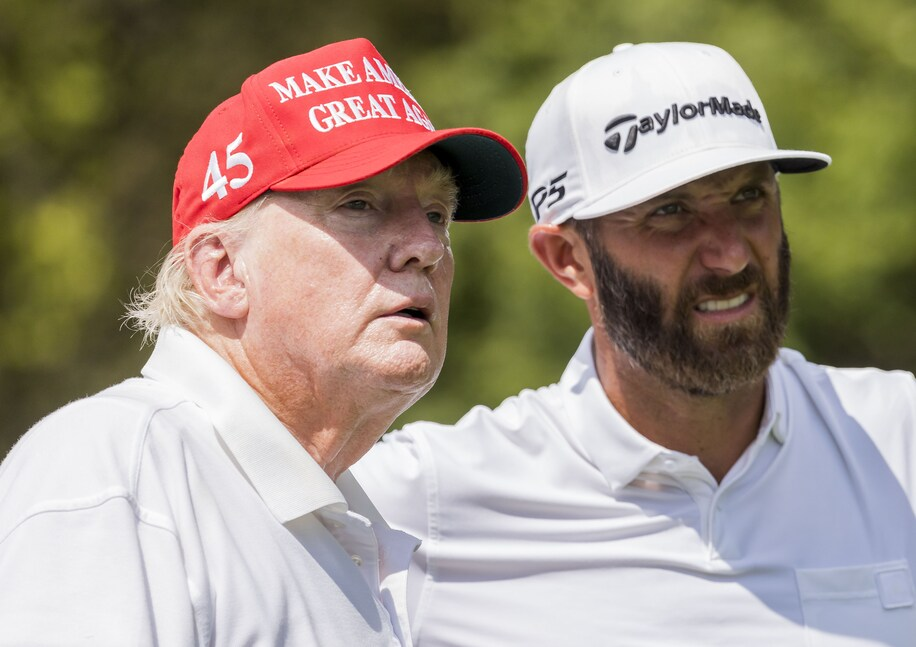 Donald Trump plays with Dustin Johnson and Bryson DeChambeau at LIV Golf: Donald Trump stepped up to the first tee box on Thursday, wearing his red cap. He showed off a rickety golf swing. He ostensibly promoted a rogue tour that his private golf club is set to host this weekend.

Trump’s golf properties aren’t authorized to host a PGA event in the near future. In that case, he has joined forces with a Saudi-backed start-up. He took part in a rare public golf outing, opening the latest LIV Golf Invitational Series tournament at his Trump National Golf Club.

He wore a white, short-sleeved polo, and posed off to a clattering of cameras in LIV’s pro-am tournament. The tournament was closed to the public but open to the media. Trump’s presence invited a lot of attention to the event. On the other hand, it underscored that the chatter surrounding the breakaway league has rarely focused on the actual competition.

The former president has always craved a major golf tournament at one of his courses. He was asked whether he had any regrets that his Bedminster club was hosting a LIV Golf event and not one sanctioned by the U.S. Golf Association or PGA Tour.

He said he had no regrets. He claimed it to be their problem.

An adviser said that Trump remains upset as the PGA Championship was relocated from Bedminster following the Jan. 6 insurrection. His Doral course lost its PGA event in 2016 located in Miami.

On the course, Trump kept his concentration and focus on golf. His private club was covered with posters of the LIV tournament. He and his son Eric were paired with Dustin Johnson and Bryson DeChambeau. They are two of the biggest names to make the jump from the PGA Tour.

The banter in the game remained light. The group of golfers teed off in front of reporters and volunteers and event staffers. The LIV Golf chief executive Greg Norman was also present. The two professionals motivated Trump when he sent his first drive straight but just off the fairway.

The pros teed off from the back tees on the 446-yard second hole.

The round that took place on Thursday was not a competitive affair. There was no score reported. Everyone played for leisure. The golfers played a single drive. Trump did not putt out a hole. He did manage to lay claim to a couple of birdies.

This week marks the third event of the LIV Golf series loaded with controversies. The LIV Golf event is scheduled to begin on the weekend.

Tom Daley opens on the Homophobia across Commonwealth