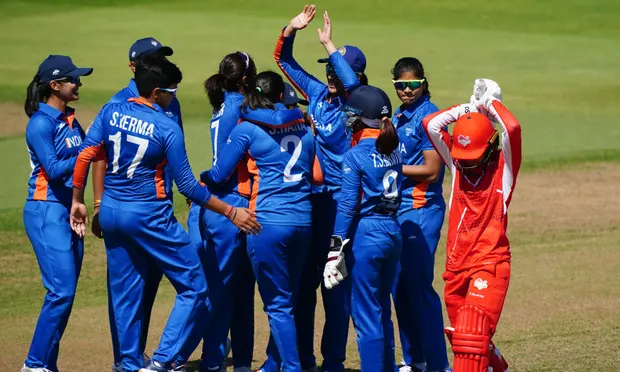 England falls short in the run chase: After squandering a golden opportunity in their semi-final match against India, England will now compete for bronze in the women’s Twenty20 competition at the Commonwealth Games.

They then had the chase in the palm of their hand, requiring 33 runs from four overs, but after Amy Jones and Natalie Sciver were run out, England fell short by four runs and didn’t win the match. India has advanced to the championship match, where they will face Australia, who reached their target of 145 runs against New Zealand with only three balls remaining in the second semi-final match.

While Mandhana was putting the bowlers through the ringer in the first seven overs, India was represented by a sizable group of fans in the audience, and the stands were absolutely packed the entire time.

It was an inning that showcased both the left-handed batter’s trademark finesse as well as his enormous power. She blasted a flat pull shot for six off of Issy Wong’s pace, adding another six off of Sciver’s medium-pace over midwicket, then launched Sarah Glenn’s leg-break over long-on.

She blasted the ball through the covers and swept the spinners to the fence with superb placement, which helped her break her own India record for the quickest half-century possible in the format.

During the first seven overs of the game, Shafali Verma did little more than keep her company as the pair put together 73 runs. At that point, Freya Kemp had Verma caught while he was attempting to knock a big shot down the ground. Then, Sciver surprised Mandhana with a slower ball, and she scooped it to short fine-leg, bringing an end to her innings with 61 runs scored off of 32 balls.

After that start, India’s total was set up for success because of Jemimah Rodrigues, who added 44 runs from 31 and shifted around the crease to open up boundary gaps over cover or midwicket.

The run chase for England was 10–20 runs easier than it had appeared likely to be because they were able to bowl some neat overs. This allowed them to hold Harmanpreet Kaur and Deepti Sharma to an average of about one run per delivery.

England got off to an even faster start than India did, racking up 42 for one after four overs despite losing Sophia Dunkley to a leg before wicket for 19; this was in comparison to India’s score of 40 for none after the same amount of time. Renuka Singh Thakur’s wides and no-balls in the first over moved the score along, Dunkley swung hard, Danni Wyatt started weaving shots through the offside, and Alice Capsey was again promoted to No 3 after Dunkley was out. After Dunkley was out, Alice Capsey was promoted to No 3 again.

However, the young woman who has contributed a significant number of runs for England made a mistake that was appropriate for her age when she was batting with her score on 13.

She went back for a second run even though the ball was on its way back to the wicketkeeper from a backward point. Capsey dove in after turning back to the end of the field where the batter was not standing, but she had turned her bat the wrong way, so the ridge on the back lifted it. She was standing on her territory but not actually in it.

Wyatt was also run out by herself when she reached 35 because she stepped outside off stump but failed to make a scoop, which resulted in the ball rebounding off her pad and back onto her stumps. Now it was up to India to reclaim its position of dominance. They did this by bowling tightly to Sciver and Jones and by having Pooja Vastrakar, Radha Yadav, and Deepti Sharma bowl quiet overs.

Sciver said that they had made things difficult for us. “Bowled exceptionally well, confined us, and removed all of our potential boundary choices.”

The 16th over appeared to have been the turning point in the match once more, as Harmanpreet turned to part-time spinner Verma for one over too many, and Jones and Sciver blasted him for 15 runs. This provided England with an equation that they would have preferred, giving them control of seven wickets.

This meant that England needed 13 runs from the last over, and they should reconsider the decision they made to send in Maia Bouchier and Katherine Brunt rather than the more natural six-hitter Sophie Ecclestone.

Ecclestone provided evidence in support of her claim by deftly driving her second ball over the rope. But by that time, it was the last ball of the match, and England had already missed its chance to win the gold. This opportunity will now present itself for India to take on Australia.

A change in attitude and approach was required after last year’s T20 World Cup: Rohit Sharma