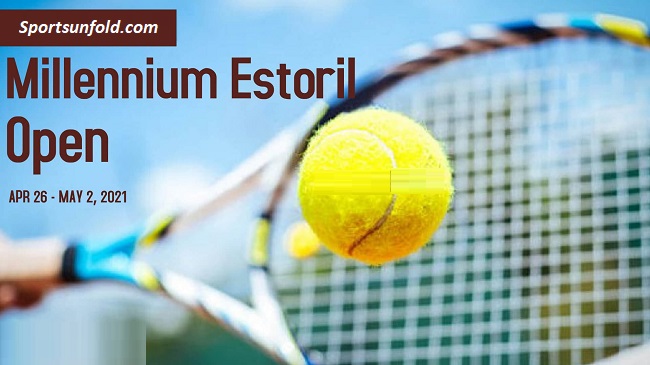 The Schedule of the Estoril Open Tennis 2021 will kick off from 26th April 2021. Whereas the total Prize Money of the Tournament is €481,270. Clube de Ténis do Estoril, Cascais in Portugal will host the complete Schedule of the Estoril Open 2021. World’s Top rank Tennis Players take part in this Competiton. The Previous Season Champions are Stephanps Tsitsipas in Singles and Jérémy Chardy/ Fabrice Martin in Doubles.

All the Matches of 2021 Estoril Open Tennis will be played between 26th April to 2nd May. Tennis Fans can catch every action of Estoril Open 2021. So Tennistv will provide the Score of the ATP World Tour. So tennis fans from all over the world can catch Tennistv’s official Website.

Star Sports Networks is likely to broadcast Coverage in India. While Hotstar is the Official Live Score Partner of Star Sports Network. Indian Tennis Fans can catch online live digital TV on Hotstar. The Offical Website of Estoril Open Tennis 2021 will provide you with the complete Schedule and Live Score of Every Match.

The Complete Players, as well as Prize Mondey Details, is available here. So Make Sure you check it out below. Estoril Open Tennis 2021 is the Men’s Tournament. Benoît Paire withdrawals from the tournament before it started. He is replaced by Fernando Verdasco. While in Doubles Event Marcel Granollers/ Horacio Zeballos Withdraws from the Tournament.

French Open 2022: Daniil Medvedev in the Next Round,…