Shivam Mavi had an unforgettable week to end 2022. Four days after being bought by IPL champions Gujarat Titans for INR 6 crore (USD 731,000 approx.) at the auction, the fast bowler earned his maiden call-up to India’s T20I squad for the three-match home series against Sri Lanka, which begins on January 3.

Mavi’s selection was a bit of a surprise, considering his T20 performances last year have been a mixed bag. He was released by Kolkata Knight Riders after a lukewarm IPL 2022, where he managed just five wickets in six games at an economy rate of 10.31. However, his recent form for Uttar Pradesh in the Syed Mushtaq Ali domestic T20s was more encouraging: ten wickets in seven matches at an economy rate of 6.64.

Mavi was hoping he would be picked for India, but when the moment arrived he still did not know what to make of the feeling. “When we play domestic games, we normally hit the bed early to get proper rest,” Mavi tells ESPNcricinfo. “But that day, because I heard the team was about to be announced, I was sitting in Saurabh [left-arm spinner Saurabh Kumar] bhaiyya’s room with Samarth [Singh]. As soon as I learnt of my selection, for a split second, everything came to a standstill.

It was an amazing feeling. I was emotional, but I knew my time had come.” Mavi thought of his parents in his finest hour yet. As a teenager, it was their backing that allowed him to travel to and live in Delhi to have a go at the Under-14s trials. When he couldn’t break through in Delhi, his family decided to shift from Mewa, a small town near Meerut, to Greater Noida to give Mavi another chance at making it.

The switch to Uttar Pradesh, along with the opportunities it brought him – like being a net bowler to the Afghanistan national team, for whom Greater Noida was once a home ground – made a difference. “This wouldn’t have been possible without their [his parents] sacrifices,” Mavi says. “They were naturally emotional too. Whatever the situation I found myself in, they always played the role of boosting my confidence and placing implicit trust in me.”

Mavi repaid that trust in 2018, when he emerged as a key member of the India Under-19s side that won the World Cup in New Zealand. He picked up nine wickets in six games at an economy rate of 4.12 and impressed several former players, including Sourav Ganguly and Ian Bishop, who were commentators at the tournament.

Speedguns recorded Mavi’s fastest delivery at 149kph; a combination of pace and swing made him and Kamlesh Nagarkoti a deadly pair during India’s victorious run. Knight Riders then staved off aggressive bidding from Delhi Capitals to snap Mavi up for INR 3 crore (USD 470,000 approx. at the time).

The Under-19 World Cup success in 2018 paved the way for the likes of Prithvi Shaw, Shubman Gill and Arshdeep Singh to go on to make their India debuts. If Mavi debuts during the T20Is against Sri Lanka, he will be the fourth player from that batch to wear the India cap. But his journey over the last four years hasn’t been easy.

“After my Under-19 World Cup performance, I thought if I kept performing this consistently, then the India call-up wasn’t too far away,” Mavi says. “But in a short while, once I got injured, that target appeared to have moved much further away. Despite this, I always wanted to keep myself positive. I just focused on my game. Injuries are part and parcel of this game, but you have to keep moving forward.”

Mavi has been plagued by multiple injuries. Prior to his India Under-19 selection, he suffered a side strain and an ACL injury. In 2019, shortly after his second IPL season with Knight Riders, he suffered a stress fracture of the back. It meant he would have had to miss IPL 2020, but Covid-19 forced the tournament to be postponed, which proved a blessing in disguise for Mavi who finished the rescheduled season with nine wickets in eight games.

In IPL 2021, Mavi took 11 wickets in nine games at an economy rate of 7.24. He was particularly impressive in the powerplay where he kept a lid on the scoring rate. However, a heel injury in the lead-up to this season left him undercooked, and that showed in IPL 2022. 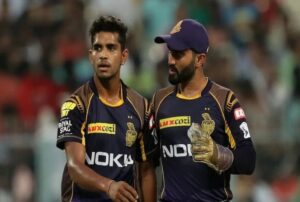