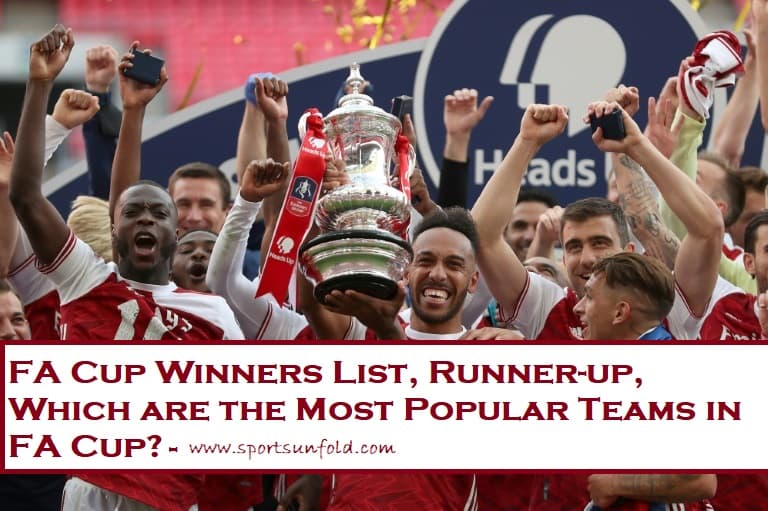 FA Cup the knockout competition in English football organized by The Football Association (FA) is one of the oldest competitions in football. The tournament will be having all the top 10 clubs of football competing for the title. Check FA Cup Winners List, Runner-up, Which are the Most Popular Teams in FA Cup?.

The Cup was founded in 1871 is a huge 150 years ago in England The number of teams taking part in the league is 736 teams (2020-21). They are the qualifiers for the WEFA Europa League. The current champions of the team are Leicester City whereas the most successful team of the tournament is Arsenal which has won the title 14 times.

Check out more details about the FA Cup winners list, runners-up, and most popular teams here on this page.

The tournament is rolling out matches since 1871 where it has been one of the most successful tournaments. clubs have been to the replay often however made it to the winning of the title

Check out the list of the winners of the tournament since 2004. It is the 124th finals where Arsenal bags the winning titles against Manchester United at the Millennium stadium. The 125th tournament was with Liverpool vs West Ham United where Liverpool turned out to be the winner of the league

Which are the Most Popular Teams in FA Cup?

One of the most successful teams of the tournament is the Arsenal which has been the winner 14 times in total. It has appeared in the finals 21 times where the runners-up are for the 7 times.

However, they have won 14 matches to date. Their first win is in the year 1930 however, their last win was in 2020. The second most successful team of the tournament is Manchester united. The club has been the winner 12 times out of the 20 matches they played. They have been the runners the 8 times

The third most popular club of the FA Cup is Chelsea has been winners for the 8 times and bags runners-up for 7 times out of the 15 matches.