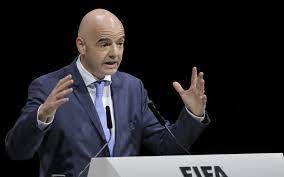 Following racial taunts directed towards Lecce defender Samuel Umtiti and teammate Lameck Banda during their home match against Lazio on Wednesday, FIFA President Gianni Infantino urged supporters to “stop up all the bigots.” Check out complete details about it below.

According to the Italian publication Gazzetta dello Sport, the game was delayed for a bit while a stadium announcement was made asking for the shouts to cease.

Lecce President Saverio Sticchi Damiani stated the French World Cup champion, who is on loan from Barcelona, had pleaded for the game to proceed while the home supporters screamed Umtiti’s name to drown out the insults.

Umtiti, a Frenchman, left the field in tears as Lecce rallied back to win the Serie A game 2-1.

In a statement, Lecce added that shouts of support for his champion drowned over racist taunts.

Through a social media post, Infantino expressed his support for Banda from Zambia and Umtiti.

“May the vast majority of fans, who are decent people, stand up and silence all the bigots once and for all,”

FIFA’s president at the moment is Giovanni Vincenzo Infantino, a Swiss-born Italian football executive. During the 2016 FIFA Extraordinary Congress, which took place in February 2016, he was chosen as the organization’s president. In June 2019, he won a second term as FIFA President. He was chosen as an International Olympic Committee member in January 2020.

Stay tuned with us to get more updates from the sports world.

Before Ronaldo, Al Nassr was referred to be the “Global” club