At the Big Bash League, Shadab Khan had a finger injury and is no longer available. He has been told to take three weeks off of work after imaging tests revealed a broken index finger.

The temporary head selector, Shahid Afridi, stated at a press conference naming the team, “We had little ODI cricket last year and this year, we are slated to play 11 ODIs before we compete in the ACC Asia Cup, followed by the World Cup in circumstances that will be familiar to us. In order to choose the best players for the two significant events, we will maximise the utilisation of these 11 ODIs by giving our reliable performers opportunity.

Tahir recently won Player of the Match honours after scoring 71 against Balochistan for Central Punjab in the Pakistan Cup final. With a total of 573 runs scored from 12 innings with a strike rate of almost 100 and an average of over 48, he was also the top run scorer in the one-day competition.

He reached a century as well as five half-centuries. Ghulam finished fourth on the Pakistan Cup scoring chart with 435 runs from just six innings, averaging 145, and a strike rate of 101.16. Sohail and Zaman were previously left off of the probables for this series, therefore their selection now constitutes a turnabout for both players.

Afridi declared on Twitter that they had each made the final cut after being added to the probables. Sohail, 33, last participated in an ODI match in 2020, however he recently participated in the Pakistan Cup and made 129 runs in four innings.

Legspinner Mir has been recognised for a good performance in the Pakistan Cup, where he finished with the most wickets taken (28 at 17.96), setting a new record. Shadab’s absence infuriated Afridi, who speculated that players might not receive NOCs while Pakistan’s domestic season was still in progress.

“I’m adamantly opposed to allowing players to play cricket while the domestic season is still going on. Definitely enable them to travel during the off-season. We’ve let certain players to go to the Bangladesh Premier League, but I’ve informed all the youngsters they need to be back 10 days before the PSL.

It needs to be given time because it is Pakistan’s league and brand.” Afridi clarified that Mohammad Rizwan was Pakistan’s first option white-ball wicketkeeper, hence he retained his spot in the ODI team. No additional wicketkeepers are on the team. Haris Rauf, whose quad ailment forced him to miss the previous four Test matches, is also back. 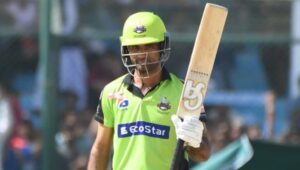 Classic in Auckland: Emma Raducanu’s injury worries ahead of the Australian Open