I find ODIs exciting but format has got to deal with a few challenges: Glenn McGrath 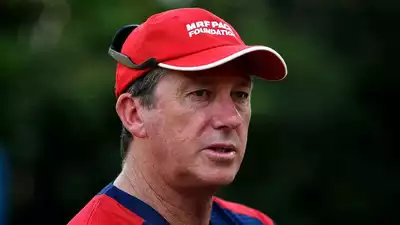 I find ODIs exciting but format has got to deal with a few challenges: Glenn McGrath

I find ODIs exciting but format has got to deal with a few challenges: Glenn McGrath, a legendary fast bowler from Australia, is still in love with the 50-over game, but he is not afraid to accept that it does face a tough threat due to the exponential popularity of T20 cricket.

The “Director of Coaching” of the MRF Pace Foundation is a traditionalist by nature and maintains the belief that test cricket is still the “final test” of a cricket player.

I would consider myself to be a traditionalist. I liked Tests, I liked my ODIs. My favorite form of cricket is still the test match. ‘I hope that it is protected and that it is still regarded in high esteem,’ McGrath said to the reporters during a conversation they were having.

As for the One-Day Internationals, there is still a lot of excitement as long as they are scoring runs. It will be interesting to observe how things develop in the future (with regard to ODIs).

The One-Day Internationals (ODIs) need to maintain their high level of excitement. They are going to have some difficulties,” he went on to say. When it comes to workload concerns, McGrath won’t be surprised if a lot of younger players start opting for Twenty20 Internationals instead.

“I would like to believe that is the case. Teams are increasingly fielding distinct Twenty20 and One-Day International squads…they are almost growing more specialized. The Twenty20 format of the game is where the money is, isn’t it? To tell you the truth, a lot of players, especially younger players who are just starting out, will look to play T20s.

McGrath, who will be ending a decade at the helm of the MRF academy, stated that he had enjoyed his time there and was proud of the players who had gone on to represent India, such as Prasidh Krishna and Avesh Khan. “It has been ten years (both parties chuckle), and the most recent two have been a touch shaky. It has been very enjoyable. I’ve enjoyed it. Our intention was to carry on in the same manner that Dennis (Lillee) had.

“I knew there was no way I could walk in there and immediately fill those shoes. My opinion is that he (Lillee) is the most qualified coach for pace bowling. It is about teaching the young men, who will become the future generation, how to become independent. McGrath is pleased that the Foundation has managed to maintain its stringent criteria and guft Indian cricket, a group of high-quality players that excel at pace.

“It was a gratifying moment for us to watch 29 of our boys and ex-boys participating in the recent Indian Premier League.”

Both Prasidh and Avesh were selected to play for India in the restricted overs format of the game. McGrath, who took over for Lillee, said, “I am incredibly proud of them…proud of all the boys.” “I am truly pleased of them.” It’s encouraging to hear that Indian skipper Rohit Sharma has found some form following his previous problems with the bat, him.

“I believe that there is some encouraging news. He is a really talented athlete. You wish for him to be successful. You root for the success of the more experienced players. Recently, in the West Indies, you may have witnessed Shubman Gill achieving a successful score. In the West Indies, the batsmen are carrying out their duties admirably.

“Cricket is very much a confidence sport,” Hardik Pandya’s coach, Glenn McGrath, stated in response to the all-impressive rounder’s performances after returning from injury. Hardik is a player that exudes a great deal of self-assurance.

If he is bowling well, it will help his batting, so long as he is hitting the ball well. He plays two roles at the same time. He is an extravagance. He bowls well, is quite intelligent, and has a strong hitting force. He has put together a solid strategy.”

Cricket’s future has to be discussed, and quickly – Ian Chapell.