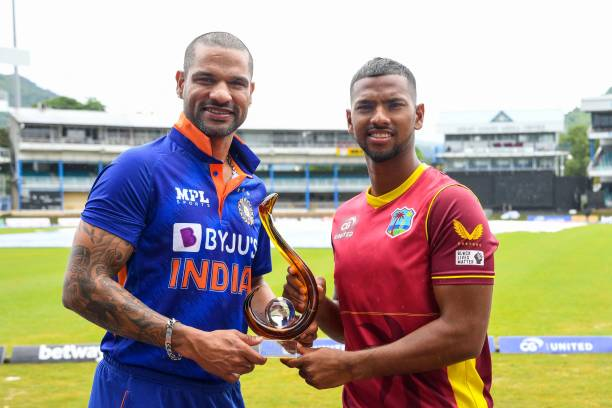 Shikhar Dhawan who is a left-hand batsman was leading team India in this series.  The squad was selected of young new talents and Shreyas Iyer was in the squad as a vice-captain. In the first match of the series, Shikhar Dhawan missed his century by just 3 runs and scored 97 runs. He moved upward to join the 13th spot in the latest ICC ranking of the batsman, and India won that match by 3 runs.

Another Indian batsman who has performed well in this series and moved upward in the ICC rankings is Shreyas Iyer. Shreyas Iyer scored back-to-back half-centuries in the first 2 matches. He jumped over 20 spots to join the 54th spot in the latest ICC rankings.

Virat Kohli and Rohit Sharma slipped down with 1 spot each in the ICC rankings to 5th and 6th spot respectively. They are rested against the West Indies.

West Indies won the toss and chose to bowl first, but the top order of India had different plans.  Dhawan’s 97, Gill’s 64, and Iyer’s 54 helped team India to leave a difficult target of 308 runs for the opponent. The top-order batsmen of west indies came with the same energy. They took the match to a crucial point in the death overs. Indian bowlers managed to defend the total and team India won the match by 3 runs.

In the second ODI at the same venue

West Indies again won the toss and opted to bat, showing their batting strength by leaving a high target of 312 for India.  Iyer scored 63 and Samson 54. The crucial knock off Axar Patel’s 64 in the death overs saved India and clinched victory by 2 wickets.

The last match of the series was interrupted by rain and unfortunately, the match could not be completed. The DLS method was in the favor of India and team India won the match.

Under the leadership of Shikhar Dhawan, India managed to clean sweep the West Indies in ODI. The performance of Iyer and Dhawan will now put selectors in confusion for the upcoming t-20 WorldCup.