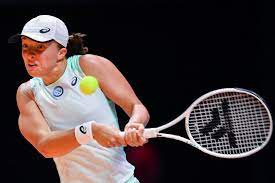 Iga Swiatek, the current world number one, stated on Wednesday that she will leave her breakthrough 2022 season behind her and instead focus on maintaining her position at the top of the women’s game.

In a spectacular season that saw her assume a dominant position at the top of the rankings, far clear of second-placed Ons Jabeur of Tunisia, the Polish star won eight singles championships, including the French and US Opens.

When Australia’s Ashleigh Barty abruptly announced her retirement in March, the 21-year-old took over the top place, but she has since claimed it as her own.

“Since I feel like I can learn a lot from these events last year, I’m going to try to kind of cut off everything that occurred last year and just focus on the future, “She made this statement before to Brisbane’s first-ever mixed-team United Cup.

“I don’t want to hang on to that too much because I want to move on and sort of concentrate on my next objectives.”

Swiatek acknowledged that she was conflicted about winning the top spot when Barty retired since she didn’t feel deserving of it.

“At first, I didn’t know if this was the right place for me to be, “She stated. “I felt like Ash really set the standard very high in terms of her behavior both on and off the court. She looked like a tremendous role model for everyone.

I must demonstrate to others and to myself that I am in the proper place.

I’m quite pleased with myself “Added she. “I feel a great sense of pleasure since I’ve worked hard my entire life to get here. I truly didn’t believe it was feasible for me.

Even now, I believe there is much I can modify and enhance.

On Saturday in Brisbane, Poland will face Kazakhstan in the opening match of the United Cup, with Swiatek facing Yulia Putintseva in the first rubber.

The year that was Just when we thought South Africa’s bowling attack could not be strengthened, up stepped a 206 cm left-arm