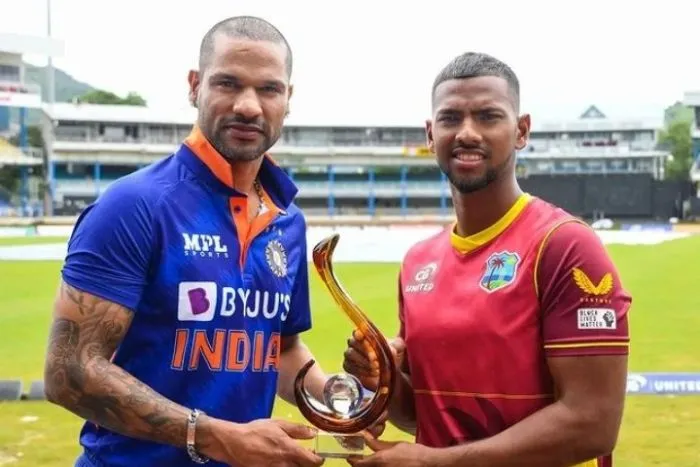 Opting to bat first, India scored 225 runs for 3 wickets in 36 overs. The opener Shubman Gill scored an unbeaten run-a-ball 98 and skipper Shikhar Dhawan scored a 74-ball 58. Chasing a revised target as per the DLS method of 257 in 35 overs, the Windies team was all out for 137 in 26 overs.

India has clinched a 3-0 over the hosts. India can walk away with pride as their batting was great. The hosts fell prey to an extraordinary bowling attack with their careless shot selection. Chahal (4/17), Siraj (2/14), and Thakur (2/17) were extremely economic and dynamic with the ball and delivered timely blows to their opponent.

To chase 257 was a nightmare for the West Indies. They had a bad start after losing opener Kyle Mayers and Shamarh Brooks in the second over to Mohammed Siraj.

The openers Shai Hope and Brandon King took over the chase for the hosts. They both managed to maintain solid running between the wickets. Hope-King scored 47 runs to their stand before Hope was stumped by wicketkeeper-batter Sanju Samson. He contributed 22 off 33 balls on delivery by spinner Yuzvendra Chahal.

At the end of 10 overs, West Indies stood at 48/3, with King at 24 and Pooran at 1. Captain Nicholas Pooran came up next on the crease. The 12th over was bowled by pacer Prasidh Krishna, not in the favor of the Indian team. Pooran-King smashed four boundaries in it together. All thanks to spinner Axar Patel who gave India their fourth wicket, removing King. He had scored 42 runs off 37 deliveries.

Keacy Carty was next to come on the crease. Pooran adopted a more attacking game. He smashed Deepak Hooda for a four and a six and faced Axar for a four. The duo dragged on to the 100-run mark at the end of 18 overs.

Finally, Shardul Thakur managed to break the 29-run stand between the duo. He bowled out Carty at 5 runs off 17 balls.

The next batsman to arrive at the crease was Jason Holder. Prasidh took his first wicket, dismissing Pooran for 42 off 32 balls after being caught by Shikhar Dhawan.

Thakur put another thrust on the hosts. He sent back Akael Hosein for just one run after Dhawan took another catch. Things continued to go downhill for the Windies team. Paul was dismissed for a duck by the bowler Chahal after he was caught by Thakur. Hayden Walsh then joined Holder. Walsh was the ninth wicket down after being caught by Dhawan. The score stood at 137.

Jayden Seales was sent back to the pavilion by Chahal. Windies were all out for 137.

Chahal was the leading bowler for India on 4/17. Siraj and Thakur also had two wickets to their credit. Krishna and Axar got one wicket each.

A 113-run stand between Shubman Gill and Shikhar Dhawan took India to 225/3 in 36 overs. The innings faced interruption due to rain. But despite this disruption, India managed to score a solid total on the board. Dhawan with 58 and Gill with 98 continued their fine batting form. Shreyas Iyer contributed 44 runs.

Electing to bat first, India was cautious for the first ten overs, focussing on rotating the strike and hitting big occasionally. Skipper Dhawan added 37th fifty in ODIs to his career. Dhawan-Gill contributed to their 100-run stand in 118 balls.

It was spinner Hayden Walsh who brought relief to the team by dismissing Dhawan for 58 off 74 balls. Pooran took the catch at mid-wicket.

The first over after rain was 18 runs. The duo chased to their 50-run partnership in just 30 balls. The duo added another 86 runs. Shreyas Iyer was then dismissed for 44 runs off 34 balls by spinner Akeal Hosein. He was caught by Keemo Paul at long-on.

India’s innings wrapped up at 225 runs for 3 wickets in 36 overs due to rain.