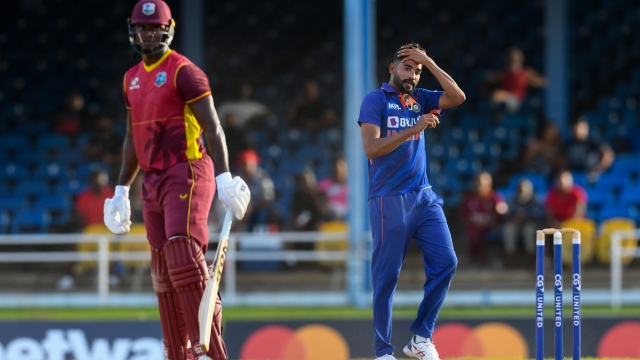 India beats West Indies by 3 runs: India won the first One Day International in a last-ball thriller against West Indies on the 22nd of July 2022, Friday, and took a 1-0 lead in the three-match series. Romario Shepherd almost pulled off the chase of 309 runs target created by the Indian team with a knock of unbeaten 39 runs but a dot on the final ball of the final over limited him from doing so.

India emerged with a positive start to the three-match ODI series against West Indies with a three-run win. The victory was difficult for them as the contest went down the wire. West Indies won the toss and took the option to bowl first.

Shikhar Dhawan scored a well-crafted 97 runs off 99 balls and Shubham Gill made a classy 64 runs off 53 balls. Together they shared a 119-run stand before the West Indies team managed to stop India at 308 runs for seven wickets.

The West Indies team needed 15 runs to be made in the final over at the Queens Park Oval but the Indian cricketer Siraj was able to stop the rampaging Romeo Shepherd (38 runs not out off 25 balls) at the last ball.

In response, West Indies managed to put up a strong fight. Kyle Mayers scored 75 runs off 68 balls while opening the innings for them. Sharmah Brooks scored 46 runs off 61 deliveries. The skipper of the West Indies team, Nicholas Pooran gave a hard time to Prasidh Krishna with two sixes over deep square leg and deep mid-wickets and ended up scoring 25 runs off 26 deliveries. The 56-run stand between the King and Akeel Hosein kept the Indian team on the edge.

However, Romario Shepherd was the star of the show for his team as he played a knock of unbeaten 39 runs from 25 deliveries. He brought the team the vicinity to a victory where only five runs would have been the path to triumph. Mohammed Siraj took the situation seriously and delivered an accurate yorker to him that became an obstacle for him to score the required amount of runs ending in the last-ball nail-biting dramatic win for India.

Shikhar Dhawan was given the title of the “Man of the Match” for his wonderful performance hitting 3 sixes and 10 fours and scoring 97 runs just 3 runs away from a perfect 100.

Shardul Thakur – Everything You need to know about him