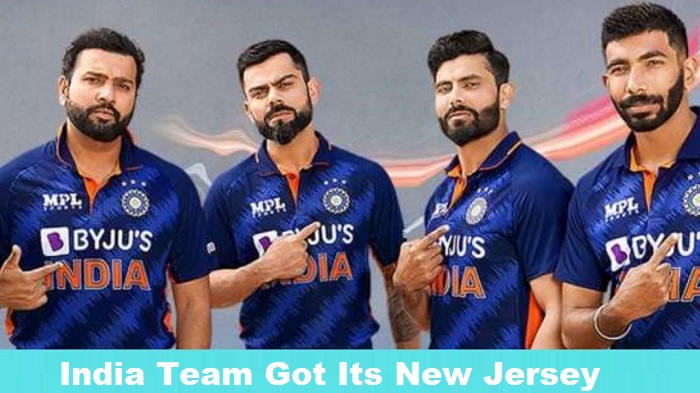 Due to the COVID pandemic, this tournament shifted to a new place. There is a total of 16 teams who are participating in this glorified tournament.

India is going to play its first match against its rival team Pakistan on 24 Oct, team India got its new jersey for this tournament.

So let’s have a glimpse of their new jersey, and how they are carrying it.

India team got its new Jersey

In this World Cup, the Indian team is going to wear their new jersey which is of different patterns. This jersey will be seen in the new jersey. This is launch on 13 Oct.

The BCCI had told only a few days ago that the new jersey of the Indian Team will be announced on 13 Oct.

The new jersey that the Indian team has got is slightly different from the old jersey. Till now the jersey that Team India was wearing was dark blue.

This jersey is also of the same color but basically, its design is different. A light blue stripe is on the middle of this jersey.

Team India is placed in Group-B in this World Cup. The team will play its first match on October 24 against its arch-rivals Pakistan.

After this, the team has to play against New Zealand on 31 October.