India versus Sri Lanka: Venkatesh Prasad was dissatisfied with the Indian team management’s decision not to include Ishan Kishan in the starting eleven for Tuesday’s first one-day international against Sri Lanka

Venkatesh Prasad was a former cricketer

Venkatesh Prasad, a former cricketer, is outraged at the Indian team management’s decision to drop Ishan Kishan from the starting eleven for Tuesday’s first one-day international against Sri Lanka.

Kishan scored a double hundred in India’s most recent 50-over match against Bangladesh and was widely regarded as Rohit Sharma’s ideal opening partner.

However, on the eve of the first match in Guwahati, Shubman Gill will partner Sharma to open the batting.

The India captain stated that he would not take anything away from the southpaw and would keep him in the mix.

“The openers, Gill and Kishan, have performed exceptionally well.

However, Rohit stated in a press conference on the eve of the first ODI,

“I think it is fair that we give Gill a chance to have a fair run because in the last games Gill got a lot of runs as well.”

But considering how both have fared,” he added.

Ishan will not give me anything. He achieved a double hundred, which is a significant achievement, and I know what it takes to achieve it.

“We need to give those guys enough chances as well just to be honest and be fair to the guys who have done really well before,” however, Rohit stated.

“It is unfortunate that we will not be able to play Ishan,”

“We will definitely try out and keep Ishan in the mix as we play a lot of games in the future to see how things go,” Sharma said.

Prasad took to Twitter to express his displeasure with team management because he was dissatisfied with this call.

The former pacer believes that the player who scored a double century in his previous game should have been given a chance.

If they wanted to give Gill a chance, Prasad stated that Kishan would have remained in the team as the wicketkeeper in place of KL Rahul.

The constant reshuffle, according to the former pacer, is to blame for India’s poor performance in limited-overs cricket.

According to Prasad, the performance of the India team is not the primary metric at this time.

“Giving a man a chance who scored a double hundred in India’s final ODI and in a series in which India lost two games and the series would have been fair.

Gill can have all the time in the world, but he can’t be dropped for a double-double.

There is a reason why we have performed poorly in limited-overs cricket. 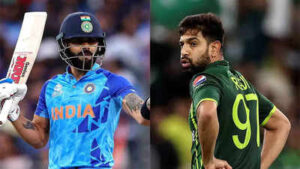 BAN vs. IND: Watch as the Indian cricket team posted a challenging total of 404 after Shubman Gill plucked a blinder at forward short leg