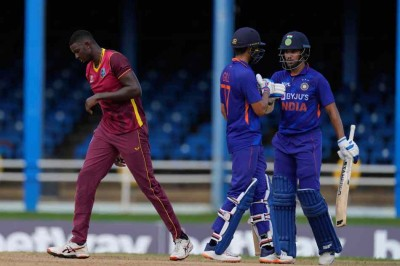 India vs. West Indies 1st T20I Predictions: The Indian team is ready to play West Indies in the T20I series. Captain Rohit Sharma will lead the squad. It starts on July 29. In the three-match ODI series, India beat West Indies 3-0.

Shikhar Dhawan-led team swept West Indies in the three-game ODI series. This format series ended last night. India beat the other team in their own country. That too by a large margin in three straight games. India was able to avoid a middle-order disaster for the whole series. The first pair of batters made a strong base for the rest of the team to build on. And they took an outstanding benefit of the circumstances.

Shubhman Gill in the ODI

India’s best player in the series was the young opener, Shubman Gill. He scored runs consistently. Along with Gill, Shreyas Iyer strengthened his position in the middle of the order in ODIs. In the second ODI, Axar Patel kept fighting for his spot by keeping India from losing.

We need some T20I action right now. The T20I team from India has been in Trinidad for a few days. In a video posted by the BCCI a few days ago, Rohit Sharma, Rishabh Pant, Bhuvneshwar Kumar, and R Ashwin, among others, were seen joining the ODI team. Of course, India will be in an excellent position to win, and the hosts will also be the favorites to win the T20I series. But putting West Indies out of the T20I is a pretty risky thing to do. West Indies is the most unpredictable cricket team in the world, especially in the shortest version of the game.

The playing eleven for Team India