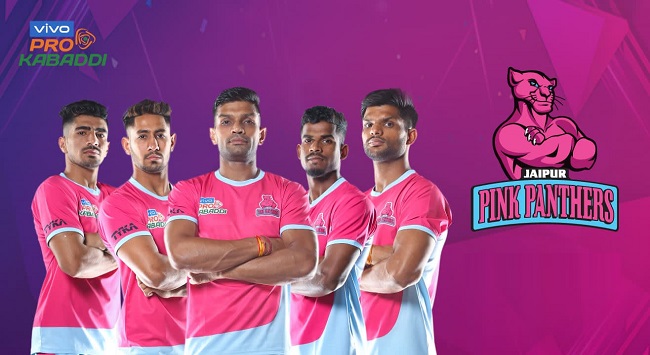 The short name for the team is the JPP where the colors for the team are pink and ocean blue. Jaipur Pink Panthers are under the ownership of Bollywood actor Abhishek Bachchan and the head coach for the team is Sanjeev Baliyan.

The captain of the team is Deepak Nivas Hooda. The location for the stadium is the Sawai Mansingh Indoor Stadium, which has a capacity of 2,000. The stadium hosts all the home matches for Jaipur Pink Panthers on the ground.

Panthers won the 2014 fixture of the Pro Kabaddi League 2021. The team marks their victory in the season by defeating U Mumba in the league.

The theme for the team is ‘Roar for Panthers’ which is an official theme whereas the colors represent the team too.

Check out more details about the Jaipur Pink Panthers Squad and schedule details here on this page for season 08.

The matches for the league are all set to roll out with the fixtures where the tournament will be rolling out the matches. The current squad is set to bring up their games and fight for another win in their court.

The fixture for the league is out now and the team schedule for all the teams is also out now. The matches for the Jaipur Pink Panthers are starting from December 23, 2021.

The team enters the league with Match 1 alongside with Gujarat Giants. The match kickstarts at 19:30 as per IST.

Another matches team takes over on December 25, 2021, the Haryana Steelers will be starting at 21:30 IST.