Jorginho wishes to stay at Chelsea when his contract expires 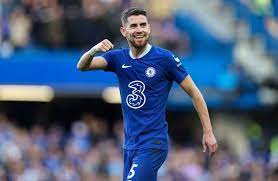 Jorginho, a midfielder for Premier League team Chelsea, stated he was not thinking about his future right now despite being allowed to talk to international clubs as of January since his contract is up at the end of the current campaign.

Jorginho wishes to stay at Chelsea when his contract expires

After joining the west London club in 2018, the 31-year-old Italian is now in his fifth season with them. In 207 appearances, he has tallied 29 goals and nine assists.

Jorginho said on Thursday, “Of course I do (want to remain), I adore Chelsea.” However, this is something I’m not going to consider right now. I have to consider how to win games. If not, there is an issue.

I’ll pay attention to each game, and then we’ll see. I’m now focused on Chelsea and aiming to win as many games as I can.

Jorginho continued by expressing his happiness with Chelsea’s new manager Graham Potter, who was appointed in September.

Jorginho stated, “I think he’s doing a really excellent job. It’s just time for the results to come our way.

I genuinely do (like working with him). He and his crew are incredibly kind people that put forth a lot of effort to win games. I’ll do everything I can to assist them in doing it.

When Chelsea returns from the World Cup break against Bournemouth at home on Tuesday, they will try to snap a five-game league losing skid.

Jorginho, a Brazilian-born Italian immigrant, started his professional career with the Verona junior team before being pushed up to the main squad when he was 15 years old. He was loaned to Sambonifacese for the 2010–11 campaign. He relocated to Napoli in January 2014, where he quickly won the Coppa Italia and the Supercoppa Italiana. Prior to his £50 million transfer to Chelsea in 2018, he played in 160 games for the team. While there, he won the UEFA Europa League in his first season and the UEFA Champions League in the 2020–21 campaign.

According to Mikel Arteta, Arsenal will be adding to its roster in January