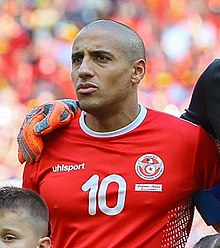 Wahbi Khazri of Tunisia, a forward, declared his retirement from international competition after his country’s team was eliminated from the World Cup in Qatar during the group stage.

Khazri joined Saudi trio Salem Al-Dawsari and Sami Al-Jaber as the all-time leading Arab goal scorers in World Cups with three goals each on Wednesday when he scored the game-winning goal in Tunisia’s 1-0 victory over the defending champions France.

Khazri said to Bein Sports French, “After the Tunisia game, in a meeting that included all the players, the technical and administrative staff, I told everyone that this time is suitable, and I congratulated everyone and wished them success.

“I am proud of the contributions I have made to my nation throughout the years, and I am confident in the future of this generation.”

The 31-year-old Montpellier striker claimed that “beating France, scoring, and being decisive” were more lovely things. Following a scoreless draw with Denmark to open their World Cup campaign, Tunisia suffered a 1-0 defeat to Australia.

As Australia defeated Denmark to secure their spot in the round of 16, where they will face Argentina, Tunisia’s victory against France was not enough to save them.

Khazri, who was born in France and made his international debut for France in 2012, then switched to Tunisia and appeared in 74 games, winning 25 of them, while contributing 25 goals.

Khazri began acting there in 2009, and he rapidly established himself as a key member of the squad, helping the team gain promotion to Ligue 2 in 2011 and subsequently Ligue 1 in 2012. In 2014, he moved on to play for Bordeaux, a French team. In the Premier League, Khazri joined Sunderland in 2016, and for the 2017–18 season, he was on loan to Rennes. Khazri caught Saint-interest Étienne’s after the season ended and was signed in July 2018 after scoring 11 goals in 29 games. Khazri committed to Montpellier for the 2022 season.