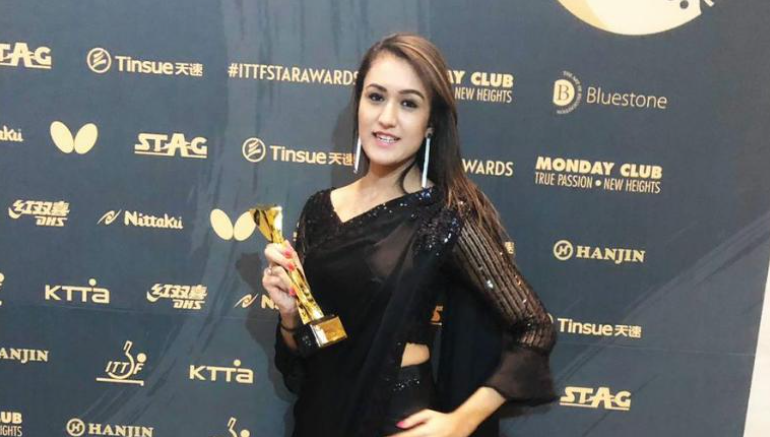 Manika Batra Bio: Manika Batra is one of the most promising female Table Tennis players in India, who gained fame by winning gold in the Commonwealth Games. Since then, she has never looked back and is one of India’s biggest medal contenders at the Olympics 2020.

Manika Batra shattered the last few barriers regarding Table Tennis, changing the game to make it accessible for everyone. She did this by proving that women were just as capable of playing the game.

Manika Batra achieved back-to-back gold and silver medals in the Gold Coast Commonwealth Games, followed by winning a team bronze medal at the 2018 Jakarta Palembang. She teamed up with Sharath Kamal in the event, ranked 47th in the Women’s World Table Tennis rankings. She is the youngest of three siblings and she has an older sister and a brother.

Manika first played Table Tennis after her older sister told her, she was introduced to the game by her elder sister and what we now call it was a love at first sight. Manika changed after she won a game in an Under-8 tournament and was advised to switch to Hans Raj Model School and train under Sandeep Gupta.

She left college after graduation to dedicate her whole time to her job as a Table Tennis player. She received offers for modeling in Delhi and Mumbai, but turned them down because she believed in pursuing what made her happy, which was playing Table Tennis. Batra refused to accept a scholarship from Peter Karlsson Academy in Sweden.

Manika Batra is openly private in personal life. She is often seen with her mother, Sushma Batra. Manika often spends time with her mom when on a break, going out for a movie or shopping with her mom.

The father of Manisha Batra, Girish Batra, suffers from a mental disorder but supports his daughter’s career by experiencing every match and appreciating her. There aren’t many rumors about her personal life and she’s entirely single-focused on her career.

At the age of 13, Batra made history as she became the youngest Indian to represent the country in a World Championship. She went on to win silver medals in Chile, and also with Ankita Das and Mouma Das won a silver medal at the Commonwealth Table Tennis Championship.

In the same year she won the bronze medal in Women’s singles at the Commonwealth Games, 2016. In 2016, she won 3 gold medals (woman’s double/double, mixed doubles and women’s team event).

Manika Batra’s height is 183 cm, and her weight is 143 lbs.  Manika’s mentor was Sandeep Gupta.

With a net worth around 80-90 Lakhs, Manika Batra owns a 4 BHK apartment in Delhi, a Piaggio Vespa Scooter worth 1 Lakh, and the Honda City ZX worth 14 Lakhs. Pickle’s Top 10 reveals that Manika Batra is one of the top 10 most influential Indian bloggers.

Tommy Paul vs Ilya Ivashka Preview: Who Has The Support, And How Can You Bet On This Epic Fight?