Paarl Royals playing 11: Paarl Royals will face off against the tournament favourites, MI Cape Town. The Paarl Royals are without one of their international acquisitions, Obed McCoy, who is sidelined due to injury. Jos Buttler will not be available throughout the competition, so PRL will want to make the most of his presence.

PRL’s pace assault will be led by Lungi Ngidi and Corbin Bosch. The spin attack will be led by Bjorn Fortuin and Tabraiz Shamsi. The middle order will be protected by Eoin Morgan and David Miller. Jason Roy and Jos Buttler will bat first, with Evan Jones set to bat third.

The weather prediction for the MICT versus PR 1st Match at Newlands, Cape Town on Tuesday, 10 January 2023 is generally overcast or sunny, or clear and wet. The temperature is expected to be approximately 12°C, with 81% humidity and a wind speed of 20 kilometres per hour.

The pitch at Newlands in Cape Town is well-balanced. The team that wins the toss will bat first. Meanwhile, in the early overs, the pacers have an advantage on this surface. The spinners will undoubtedly have the upper hand in the middle overs. Overall, it’s a good pitch for hitters. As a result, we may expect a high-scoring battle between MICT and PR.

Sports18 and Viacom18 Sports will be the official broadcasters of the SA20 2023 event in India. As a result, you can watch the live broadcast of MI Cape Town against Paarl Royals on these stations. Live streaming is also available on Viacom 18’s Jio Cinema App. 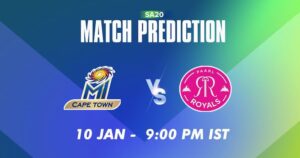