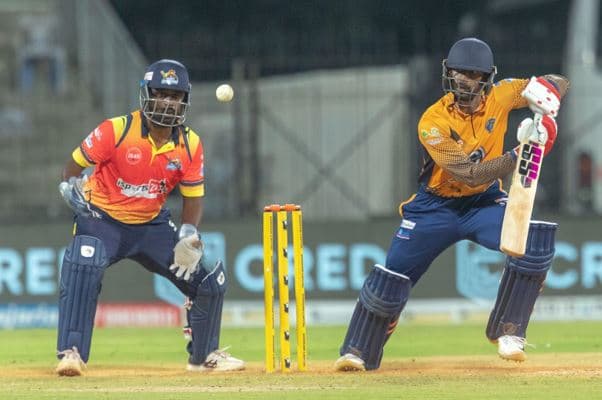 Chennai, August 5: Nellai Royal Kings continued to make steady progress and stayed in the hunt for a Playoff spot in the Shriram Capital Tamil Nadu Premier League. On Thursday, they downed Salem Spartans by eight wickets at the MA Chidambaram Stadium to notch their third victory from six games.

Captain Baba Aparajith and Sanjay Yadav turned in superb all-round displays to steer their side’s surge. While the 27-year-old Aparajith took two wickets with his off-spin and then struck a 42 ball 38 (4 fours, 1 six), Yadav (1-18) bowled a tight spell of left-arm spin and then smashed an unbeaten 41 off 26 balls (3 fours, 3 sixes) to help Nellai chase down a low target of 121 with ease. Nellai finished on 121 for two in 18.3 overs to gain two points and rose from sixth position in the standings to the

Salem, who were languishing at the bottom, have little hope of entering the top four after this defeat as they have just three points from six points. Interestingly, it was the first time in 15 matches that pacer Ganeshan Periyasamy (0-25) went wicketless. Ever since he made his debut last season, the 27-year-old ‘Slinger from Salem’ had claimed at least a wicket in every match he played. Aparajith got out to a brilliant catch on the fence by Vijay Shankar off left-arm spinner M Ganesh Moorthi. But the 26-year-old Sanjay Yadav and Pradosh Ranjan Paul (23 not out off 34 balls, 2 fours) saw the side through without much ado. The Yadav-Paul alliance was

the best of the Nellai innings as they raised 54 runs in 39 balls without getting separated.

Aparajith indicated that they are keen on signing off their league engagement on a high note when they face Lyca Kovai Kings on Sunday (August 8). “This win was very important but at the same time we have one eye on the next game (against Kovai). We are very happy to have won, so we will enjoy tonight and be back fresh for the next one,” he said.

Barring the third-wicket partnership of 64 runs off 51 balls between star all-rounder Vijay Shankar (41 off 35 balls, 2 fours, 2 sixes) and Abishiek Selvakumar (25 off 21 balls, 2 fours) there was nothing to shout about in the Salem batting. The Salem innings just gave away once this partnership was broken in the 12th over when Abishiek was bowled

by Yadav. After sitting pretty at 69-2 in 11 overs, they added just 51 runs in nine overs and lost six wickets too.

Salem suffered a blow earlier in the day when their captain Daryl S Ferrario was ruled out of the match due to a twisted ankle. KH Gopinath stepped in his place and made a good start by winning the toss but the batsmen failed to back that call.

It was an important milestone for the tournament on Thursday as this was the 150th  match, indicative of an impressive journey that began in 2016.

Upstox Most Valuable Player of the Match:  Sanjay Yadav (NRK)