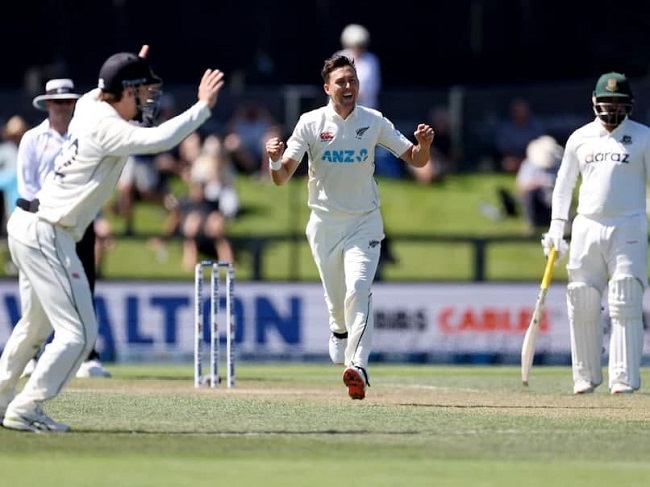 New Zealand and Bangladesh are playing 2 match test series which ends with the result of Tie and team NZ gives the gift of match win to Ross Taylor.

Bangladesh defeated hosts New Zealand in the first Test match of the series, but the hosts did not take any time to equalize the previous defeat and ended the second Test match in 3 days.

Team Black Caps won this match with 117 runs which is one of the good figures. This is the last test match of Ross Taylor.

New Zealand achieved a big win over Bangladesh by an innings and 117 runs. NZ took revenge for losing the first test to Bangladesh. With this win, the series was tied at 1-1.

In a first test match, Bangladesh beat NZ, and after that, this last match is the Do or Die match, after this, they both play the ODI series.

New Zealand forced Bangladesh to follow on in the second Test and won by an innings and 117.

Devon Conway becomes a player of the series and Tom Latham as a man of the match in the second match.

Ross Taylor announces this news before the start of the Bangladesh series that this is the last match of his carrier after this test match he takes retirement.

Due to this when he came on the ground for batting players of Bangladesh clapped for them and show respect, in its answer Ross smile and accept this beautiful gesture.

Along with this match, New Zealand’s number one batsman Ross Taylor also said goodbye to his Test career. Taylor has already announced that he will retire from international cricket after the domestic summer.

At the same time, he will play the last international match of his career on 4 April in Hamilton.

Taylor bid farewell to his Test career with the wicket. Taylor bundled out Bangladesh’s innings for 278 by getting Ebadat Hossain caught at the hands of Latham.