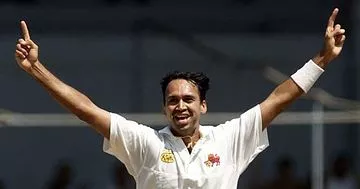 Nilesh Kulkarni recounts his thrilling : For an Indian cricket fan, the run-feast in Colombo during the first Test match of the series that started on August 2, 1997, is remembered for an exceptional bowling record. Nilesh Kulkarni, who spins the ball with his left arm, became the first Indian bowler to get a wicket with his first ball in a Test match.

Even though his first ball got rid of opener Marvan Atapattu, Nilesh Kulkarni didn’t get another wicket for the successive 419 balls he threw in the match. During that time, Sri Lanka scored a record 952 for six. On the third and fourth day of the match, India couldn’t take a wicket, so Sanath Jayasuriya (340) and Roshan Mahanama (236) put together 576 runs.

Nilesh Kulkarni, who is now the founder and director of a sports management institute, says that the week he spent in Colombo taught him “one of the most important lessons in life.”

Here’s what he said while recalling the event!

It’s been 25 years since that week. Do you look at it as a memorable or forgettable week?

Surely there wasn’t a capping ceremony around toss time during those days?

“Definitely not. The cap was given to us before the tour started as part of the kit that was provided to us. There was no formal capping ceremony as such. Things have changed now, but in those days, the kit came to my house and we carried that.”

Did you expect to bowl when India declared a few minutes before stumps on the second evening?

“Marvan (Atapattu) and Sanath (Jayasuriya) were going great guns at the start. We had to bowl around an hour or so and the focus was to get a couple of wickets. I was not hoping to bowl. Rajesh Chauhan was to bowl the last over but Marvan took a single in the last couple of balls of the previous over, which made Sachin (Tendulkar, the captain) change his mind and get a left-arm spinner bowling to a right-hander.”

“While I was changing my fielding position, suddenly he called and asked me to bowl. Since I hadn’t had time to prepare, I wasn’t really ready. As I was handing the cap to the umpire, he told me I had less than two minutes to bowl the first ball. It was a blessing in disguise that I didn’t get enough time to bowl the debut over.”

“All I was thinking of was “don’t embarrass yourself, make sure you bowl the right ball and hit the right length so that the debut would be memorable.” I just did it. Luckily for me, Marvan was playing a bit of an aggressive innings so he wanted to go after the bowlers and dominate. He went for that cover drive and Nayan Mongia completed the catch.”

So what happened after stumps?

“In fact, I didn’t know it was a record. All of us were happy. The day was called off. We were coming back and I was giving throwdowns to a few batters. I was completely in a casual mood till a few press reporters came down and told me it was a world record and I was the first from India. That’s when it hit me that something different had happened in my life. Incidentally, after the day’s play, I met Muralitharan at the hotel and he told me: “Well done, good luck for the next three days.” Little did I realise that I was not going to get a wicket for the next three days.”

Wasn’t that one of the greatest life-lessons?

“Absolutely. The vagaries of life. The extremities of life, I experienced them in my debut match. I got a wicket off the first ball, was feeling at the top of the world. The next three days, I struggled to get another wicket. Fortunately for me, just before that series, I had bowled a marathon spell for Mumbai in the Ranji Trophy final at Gwalior. Even in the semifinal against Madhya Pradesh, I had a fairly long spell.”

“So fortunately for me, I knew how to manage bowling 50-70 overs. You need to condition yourself mentally but you don’t expect that, especially in the first match. To get a taste of Test cricket in such a manner, having come in as the highest wicket-taker in the Ranji season. You go in with that confidence, you start with a real high and then you hit a low for the next three days. I share the same with my students.”

Does Atapattu still hold a grudge against you for having entered his name in record books for the wrong reasons?

“Every time I meet Marvan, we joke about it and he always pulls my leg. In fact, Neluni, his wife — either they were just married or engaged — had come to watch him play for the first time that day and I got him out in the last over of the day. We always joke about it.”