NZ lead close to 200 after Abrar, Naseem and Hasan’s strikes

On the fourth day of the second Test, Pakistan’s bowlers worked together to gently put New Zealand on the back foot. In a fast-paced 20 minutes of cricket that included multiple reviews, Tom Latham and Kane Williamson both fell in short succession.

Then, Henry Nicholls was given back, leaving New Zealand four down for 151 and their lead at 192 with four sessions left. A fifth-wicket stand was being formed by Tom Blundell (22*) and Michael Bracewell (10*) at the crease.

Soon after lunch, Latham and Williamson got the scoring going, gradually pushing up the tempo until Latham, by cutting Naseem Shah for four in the 31st over, reached his 25th half-century. Latham was caught on the back foot by Abrar Ahmed who was approaching the stumps in the 31st over, but the umpire rejected the lbw challenge.

Latham would have been eliminated had they gone up, according to ball tracking, had Pakistan, who had only one review left, reviewed. After two hours of labour, Pakistan finally got a break when Naseem caught Latham at short-midwicket for 62 with Abrar making a diving catch.

After receiving two pitches, new batter Henry Nicholls was struck out by umpire Aleem Dar despite moving forward to drive. A review revealed that there was a space between the bat and the ball. After that, Abrar stepped up his game, lbw Williamson on 41 after an unsuccessful sweep attempt.

Williamson requested a replay, but the ball nicked Pakistan’s leg stump and kept the umpire’s decision in their favour. With Abrar throwing a googly after the first ball, Blundell was declared leg before wicket. Blundell, though, reviewed and managed to survive thanks to an insider’s edge.

Pakistan’s morale was raised during the frenzied stretch of play, and the two new hitters were kept quiet. In his first 20 deliveries, Nicholls played 18 dots; however, when he attempted to draw Hasan Ali, he conceded a catch to mid-off on 5.

The session was subsequently completed by Bracewell and Blundell, with the former scoring the only two boundaries in a 56-ball, 23-run partnership. Blundell held one end up, generally remaining defensive and utilising his feet to block Abrar’s turn rather than attack.

Though Blundell could have been out in the final over before tea. After surviving an edge to the keeper Sarfaraz Ahmed off Abrar while pushing at a length ball, he remained unbeaten at halftime.

Latham and Williamson helped New Zealand reach 76 for one earlier in the day after Devon Conway was dismissed for a first-ball duck. After Pakistan was dismissed for 408 runs in the first over of the fourth day, they took the field early. 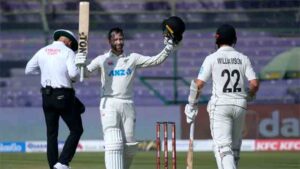