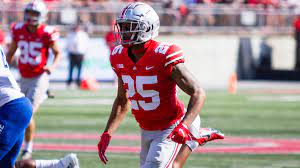 Ohio State Walk-On Xavier Johnson Sets Example For Younger Players: Xavier Johnson, a fifth-year senior for the Ohio State Buckeyes, has played a variety of positions for the team despite the fact that he turned down multiple scholarships offers right out of high school to walk on at Ohio State.

When he first arrived in Columbus in 2018, he played cornerback for the team. Over the course of the next two seasons, though, he alternated playing running back and wide receiver before finally deciding to focus on wide receiver last fall.

The native of Cincinnati, though, has impressed the coaching staff with his willingness to do whatever is best for the team rather than getting agitated by the movement or his lack of playing time, with only 22 career offensive snaps to his name to this point.

When asked what Johnson’s reaction would be if he was asked to return to the backfield, running backs coach Tony Alford responded on Friday by saying that Johnson’s response would be something along the lines of, “How fast can I get there, and tell me what you need me to do?” “At that point, he would come in extra and ask, ‘What have you put in that I don’t know?’… Let’s meet afterward, let’s meet early. That he would act in such a way is completely unquestionable. The outcome is already predetermined.

Cameroon’s female rugby players shine a light on the…

“Even if they told him to come over here and play corner, he wouldn’t act any differently,” she added. He is an indispensable member of the team. I am extremely pleased with the way he has carried himself and with the fact that I have been able to witness him mature into the guy that he is.

Johnson has built a name for himself for Ohio State on special teams, despite the fact that he has yet to record a catch in his professional career and has only gained 17 yards on four carries. In point of fact, he played the second-most kickoff, kick return, punt, and punt return snaps (225) of anyone on the team during the previous season, following only redshirt junior tight end Cade Stover. Cade Stover played all of his snaps as a tight end (250).

This selflessness is contagious, which is why Alford often cites Johnson and Kamryn Babb as players who younger players and other newcomers should use as an example of how to carry themselves as Buckeyes. Babb is also a fifth-year senior wide receiver for Ohio State.

According to Alford, “It’s very crucial” to have players like that in your program. “It’s critically important.” “That’s the testimony of a guy that’s been transferred about, and maybe things haven’t always gone his way. He didn’t throw a fit or whine about it; instead, he quietly laid his head on the table and said, “What do I have to do next to get better?”

“It doesn’t matter if you were a walk-on, a five-star recruit, first-team, or fifth-team; everybody goes through something. It doesn’t matter. From my perspective, all that Xavier has done is keep going through tough times and figure out new methods to prevail over whatever was going on. He didn’t accuse anyone else of anything, but he did kind of accuse himself of something and ask, “Where can I get better?” If there is a problem now occurring, how can I make it better by implementing some of the modifications that I am required to do?

“He didn’t create excuses for this or that not happening; instead, he found ways to conquer and persevere through whatever came his way.” But that is only a snapshot of how he conducts himself in general, not just in this structure… That youngster has my heart.