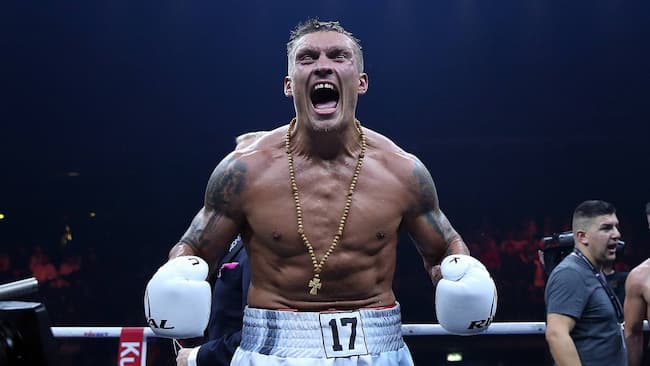 Oleksandr Usyk is one of the best boxers in the world right now. “The Cat” is currently undefeated as a professional boxer. The Ukrainian is popularly known for his dominance inside the boxing ring and also his off-stage antics. He has a lot of championships in his record as a boxer. Check Oleksandr Usyk Net Worth.

Usyk was born in Simferopol, Ukrainian SSR, the Soviet Union on 17th January 1987. He stands tall at a height of 6 ft 3 in and walks around weighing 205-225 lbs. He prefers fighting in cruiserweight in boxing. Multiple world championships and an Olympic gold is part of Oleksandr’s legacy.

He has shattered several records and is the first cruiserweight in the world who managed to hold all four major world championships. His amateur boxing ended with a record of 335-15. The Ukrainian boxer has a record of 18-0-0 in his professional boxing career.

Check out his net worth and personal life.

Oleksandr Usyk was born on the 17th of January in 1987, in Simferopol, that time the city of Ukrainian SSR, Soviet Union. At 33 years old, Oleksandr Usyk’s height is 6′ 3″ and his Weight is 216 lbs. His wife is Yekaterina Usyk (m. 2009). The couple has 3 children. Their family lives together in Kyiv, Ukraine.

The fighter does a lot of charity work and runs a non-profit foundation. He has a 12-year-old, an 8-year-old, and a 6-year-old. The fighter made the headlines for his political statement which said he would never exchange his Ukrainian citizenship for Russian.

Oleksandr Usyk’s net worth is estimated to be around $6 million. He has shattered several records and is the first cruiserweight in the world who managed to hold all four major world championships.

As for his purse, Usyk earned $1 million or more in his last three fights and with an anticipated bout against Anthony Joshua coming up, this value is expected to go much higher. His primary source of income is boxing and other promotions related to boxing.

He earns a hefty paycheck. In his recent fight against Derek Chisora, he got a guaranteed paycheck of $2.5 million. The paychecks do not include the pay-per-view shares. Apart from boxing, he has an endorsement deal with BoxRaw. The fighter even has a decent social media following which aids in his promotions and endorsements.