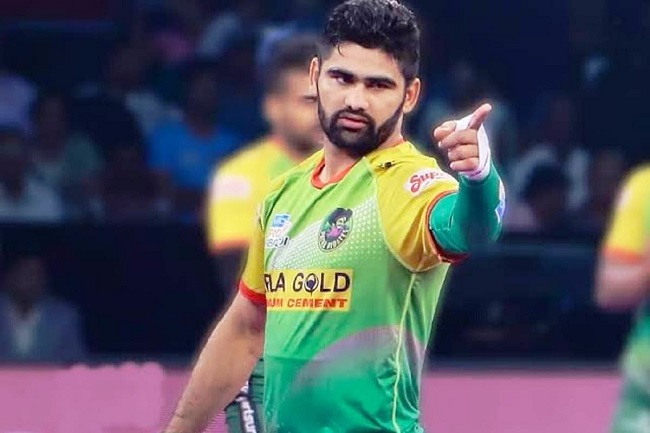 Pardeep Narwal is an Indian Kabaddi player who plays for UP Yoddha, he is one of the most prominent players and highest raid point scorers in history. Narwal is the first player to score 900 points in vivo kabaddi, In the year 2016-17, he also helped another team Patna Pirates to win the title. Check Pardeep Narwal Net Worth of Pro Kabaddi Season 8.

Being such a great player who has always given his best and worked hard, also had received many awards and achievements. His net worth of PKL is approximately 1.65 crore.

Pardeep is considered one of the strongest players and also his earning is good compared to other players as his total net worth is around Rs. 20 crore. So now you can check out the complete details about Pardeep Narwal Salary of Pro Kabaddi Season 8.

As mentioned in the above details Pardeep is one of the expensive players of the Pro Kabaddi League whose current net worth is Rs. 20 crores. This is not much good income as compared to other sports like cricket, football compared.

Though Pro Kabaddi League gives a good amount of income, In the year 2019 60,50,000 broke a record of all players. Also in every three to four years, his income keeps on changing to 4% to 35% if they show their consistency or win any title.

As mentioned by Pardeep being such a talented and strong player he is also one of the most expensive players, the team UP Yoddha has brought him in Rs. 1.65 crore. Whereas when he was playing for Patna Pirates his salary was not much but it was around 80 to 90 lakh which is not yet official.

After giving such as consistent performance and making the team win he has come a long way and still, he hasn’t stopped he is giving his best.

The other details have not been confirmed by the Kabaddi league, but soon they will be official and will be updated on our page.