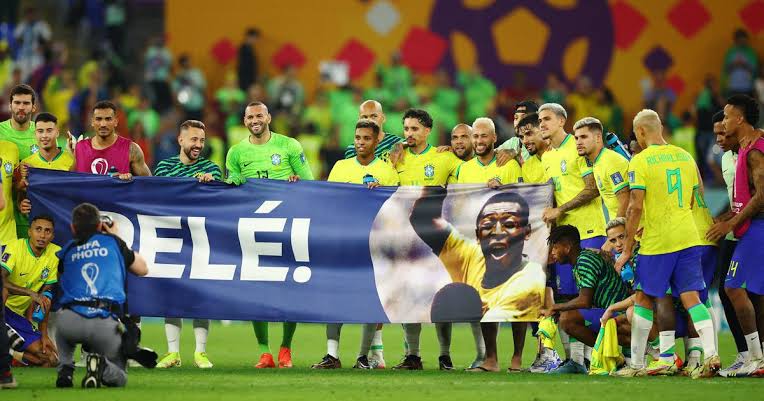 The Brazilian team went to the World Cup quarterfinals, and Pele, an ailing 82-year-old football legend who has frightened fans across the world about his health, declared on Monday that he was cheering for them from a hospital bed.

Pele, who is widely regarded as the best player to ever play the game, was admitted to a hospital in Sao Paulo last Tuesday while receiving treatment for colon cancer at the same time that Brazil was attempting to win a record-breaking sixth World Cup in Qatar.

Pele acknowledged that he was watching in a message on Instagram as the “Selecao” got ready for their 4-1 rout of South Korea in the round of 16.

On his way to dazzle the world with his remarkable talent during Brazil’s first World Cup championship run, “The King” released a faded colour photo of himself as a baby-faced 17-year-old in Stockholm, Sweden.

As Pele walked through the streets of Sweden in 1958, she was contemplating keeping a promise she had given to her father.

“I am aware that a large portion of the national squad made similar commitments and is aiming to qualify for their first World Cup. My friends, I want to motivate you. Together, we are travelling this path. To our Brazil: Good luck!

With a string of goals that evoked the “beautiful game” that Pele personified, Neymar and the team did him proud.

The players returned to the pitch after the game with a banner that read, “Pele!” and a picture of him joyfully celebrating Brazil’s World Cup victory in 1970.

Inside the stadium, Pele supporters were holding up pictures and homage to him.

He had surgery for a colon tumour in September 2021, and ever then, he has been receiving chemotherapy. He needed a “reevaluation” of his therapies, though, according to the doctors.

Additionally, they claimed he had a respiratory ailment that was being treated with medication.

Kely Arantes Nascimento, Pele’s daughter, stated on Sunday that Pele, who has received all of her vaccinations, developed the new sickness three weeks ago as a result of a Covid-19 infection.

She spoke with Brazilian TV station Globo. His life is not in immediate danger, according to Pele’s family and the medics treating him.