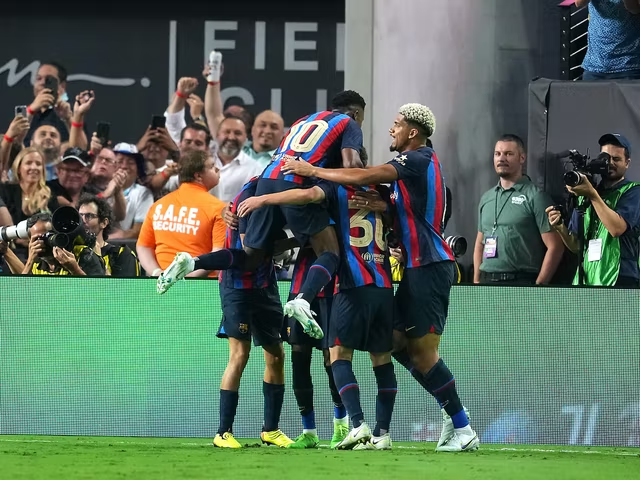 Barcelona vs. Pumas – prediction, team news, lineups: In the Joan Gamper Trophy match that will take place on Saturday evening at Camp Nou, Barcelona will play host to the Mexican team Pumas.

The Catalan giants will kick off their 2022-23 La Liga campaign on August 13 at home against Rayo Vallecano, while the Pumas have already played six matches in their Opening Championship season and are now in ninth place with eight points.

They have defeated the likes of Arsenal, Boca Juniors, Roma, and Santos in the competition during the last ten years. In its history, Barcelona has won the Joan Gamper Trophy a total of 44 times. Their most recent success came in 2016 when they won 3-0 against Italian heavyweights Juventus.

The match between the Catalan giants and Roma was supposed to take place, but Roma withdrew from the competition, and Pumas, who have already begun their domestic season, will now take its place. The match was originally scheduled to take place.

This summer, Barcelona has participated in five pre-season friendlies. They began their preparations for the next season with a 1-1 draw against Olot on July 13. They then went on to win both of their subsequent pre-season matches against Inter Miami and Barcelona.

The team captained by Xavi then played Juventus to a 2-2 draw before concluding their pre-season tour of North America with a 2-0 victory over the New York Red Bulls over the past weekend.

Despite the fact that they are still having financial difficulties, Barcelona has been very active this summer, signing players such as Andreas Christensen, Franck Kessie, Raphinha, Robert Lewandowski, and Jules Kounde. They will begin their 2022–2023 La Liga season on July 13 at home against Rayo Vallecano.

Pumas, on the other hand, are now in the sixth match of their 2022 Opening Championship campaign. They have collected eight points from their first six matches, which has placed them in the ninth position in the Liga MX standings.

The Mexican team will come into this contest on the heels of a 1-1 draw with Monterrey the previous weekend, with Dani Alves in the side following his arrival this summer. The Brazilian was released by Barcelona at the end of July due to the expiration of his contract, but he will be back at Camp Nou for this contest.

In the history of Pumas, this will be only the second occasion that they have ever competed against Barcelona. In the team’s only previous match, Barcelona came out on top with a score of 6-1.

Sevilla FC vs FC Barcelona: It’s never easy for Barca at the…

The seven-time Mexican champions are scheduled to play an important league match against Club America on August 13. However, the opportunity to compete against a team of Barcelona’s caliber does not present itself very frequently, and Andres Lillini’s squad will be motivated to make the most of this unanticipated opportunity.

The Barcelona manager, Xavi, is now working on putting together his team for the upcoming season, so it would not be surprising to see the eleven players that he has selected to start against Rayo take the pitch when the game begins.

Lewandowski should be leading the line, and the Poland international will be looking to score his first goal for the club during the course of the match. However, there will be wholesale changes made throughout the competition.

Despite the current rumors concerning Frenkie de Jong’s future, it is possible that he will be engaged in the game again; nevertheless, it is quite doubtful that the Netherlands international will be considered for a slot in the starting XI.

Alves is expected to start for Pumas against his previous team, and the Brazilian will most likely take up a position in the middle of the field.

Although head coach Lillini plans to utilize his whole roster in this game, it is anticipated that the starting lineup will feature several players who are already familiar with one another, with Argentine Juan Ignacio Dinenno likely to take the lead in the attack.

Eduardo Salvio, formerly of Atletico Madrid, is also set to feature in a forward area for the Mexican outfit, although Jorge Ruvalcaba is scheduled to miss the battle due to a foot ailment. Salvio and Ruvalcaba both played for Atletico Madrid.

The likely starting lineup for Barcelona is as follows:

Possible starting lineup for the Pumas:

Pumas are capable of making this a challenging encounter for Barcelona, as the Mexican team possesses a high level of skill and should be in good shape from a fitness standpoint. Pumas have the potential to make this a close match. Having said that, we are very certain that the superior quality of the home team will be on display throughout the match.