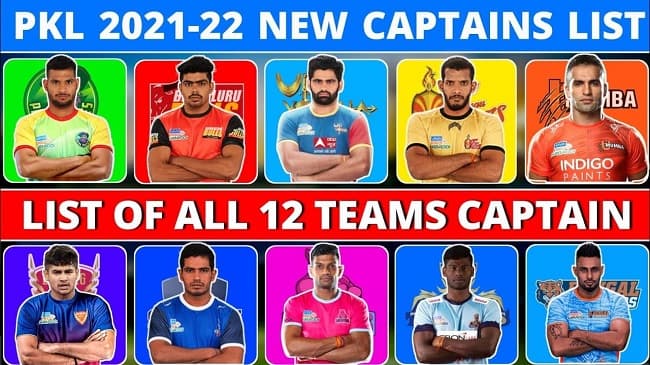 The excitement levels are high with the Pro Kabaddi League 2021 set to start in less than 7 days. There will be the first match between Bengaluru Bulls & U Mumba. These matches will be followed later by Telugu Titans vs. Tamil Thalaivas as well as defending champions Bengal Warriors versus UP Yoddha. Check Pro Kabaddi 2021-22 Captains List.

Pro Kabaddi League India’s premier Kabaddi League will be contested by 12 teams representing different parts of the country. Bengal Warriors is currently the defending champion. They won it back again in 2019 and were unable to hold the competition in 2020 due to COVID-19.

Today, we’ll take a look to see who the captains are for all the teams in the Pro Kabaddi League. Haryana Steelers, while all the teams have named their captains yet, is still waiting to be named.

26-year old Nitin Tomar will lead Puneri Paltan. The role of leader is not new for the raider, as he before led the UP Yodha group. Nitin Tomar, a prominent name in PKL’s history, is Nitin Tomar. Nitin Tomar made his debut playing with the Bengal Warriors. He later joined Puneri Paltan, and then joined UP Yodha. He returned to Plans in the following season with the Yodhha.

From this year onward, Bengaluru Bulls are without Rohit Kumar, their star player. Telugu Titans have purchased Rohit during the Auction. Pawan Kumar Sharma Sehrawat, star raider, and Bengaluru Bulls captain will be taking the reins this year.

Rohit Kumar, a legendary raider, will continue to lead a team despite his move from Bengaluru and Telugu. Rohit was Bengaluru’s captain up until last season. He will take the Telugu Titans command this year.

Fazel Atrachali, U Mumba’s star defender from Iran will once more be leading the Mumbai-based side. He led U Mumba’s side to the semi-finals in the 2019 edition. Fazel is back to lead the team and would like to continue this journey.

Joginder Singh Narwal will be leading the Dabangg Delhi team, based in Delhi. He is a veteran defender. Joginder Nagwal has been playing in PKL for the past two seasons. The Delhi team would love to enjoy his experience.

Jaipur Pink Panthers based in Rajasthan have put their faith in Deepak Nawas Hooda. Deepak Hooda was retained and will now lead the team. Deepak Hooda has been a great PKL employee.

Nitesh Kul, 24, will be leading Uttar Pradesh’s Yoddhas. He was also the captain of the team in last season’s playoffs, will lead the Yoddhas. Nitesh was integral to that success scoring 75 tackles.

Patna Pirates are the most successful Pro Kabaddi League team having won the title three. Prashant Rai will lead Patna’s Pirates this season. This raider was a member of the Haryana Steelers’ last edition.

Gujarat Giants will continue to be led by Sunil Kumar as their captain. This team lost to Bengaluru Bulls in the finals of PKL 2018.

Bengal Warriors, the Pro Kabaddi League champions, are continuing with their star raider captain Maninder Sehgal. This Team reached the finals for the first time and won the trophy. Captain Maninder Sinha played a major role in that.

Lucknow team give a big announcement in IPL, this name will be on their jersey for 3 years