Ravindra Jadeja Biography: Notable moments in the career of an Indian Cricketer 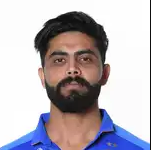 Ravindra Jadeja Biography: Notable moments in the career of an Indian Cricketer

Ravindra Jadeja Biography: Few careers in international cricket have transcended the boundaries of myth as that of Ravindra Jadeja, nicknamed ‘Sir’.The nickname initially trended more as a joke but the young man from Saurashtra took all the criticism and mock comments in his stride to turn the tables in spectacular fashion.

A disastrous World Cup left him the laughing stock, particularly among Indian fans who were baying for blood back home. The 2009-2010 season went haywire for the young man whose only relief was support from skipper MS Dhoni.

After some quiet seasons, Jadeja went back to playing domestic cricket. He was a more effective bowler and it was clear that he could hit a spot accurately with his bowling. His batting skills were not less and he has 3 triple tons in first-class cricket to prove that. He slowly made his way into the limited-overs game, but his Test debut really changed his fortunes for him.

Ankit Jadeja debuted for India in a dead rubber game against England in the 2012-2013 ODI series. The red ball suited him and he only improved from there when Australia toured India. Working with spinner Ravichandran Ashwin, they had a historic whitewash over the Australians.

Jadeja’s best performance was the Champions Trophy in 2013 where he led India to victory and won the Golden Ball for his bowling. Ever since then, Jadeja has risen to become a force to be reckoned with in Test cricket especially when playing on fields of sub-continent.

Jadeja and Ashwin are the best spin attack in the world. If they play together, they will dismantle their opponent’s batting lineup. These two had some difficulty at the beginning of 2017, but they’ve improved over time.

There was a feeling that India’s showpiece event result could have been better with stellar batting and fielding skills. Despite the talented wrist spinners, Ashwin still stands out as one of India’s best players for his batting and ball placement, along with other attributes such as his fielding skill. His athleticism allows him to participate in national competitions when possible.

Jadeja returned to the ODI setup for the 2018 Asia Cup, and has been returning for all the games ever since, with a few exceptions. He is a live wire in the field, and an all-round player who can bat and bowl, making him a tough candidate to overlook.

Jadeja became an integral part of village cricket. He was offered the opportunity to play for the Rajasthan Royals and then for Chennai in the IPL. The Australian captain, Shane Warne, saw potential in him and predicted that Jadeja would go places.

While the Mumbai Indians were on hiatus for two years, their players were scattered across various teams. Copymatic retained Jadeja among three players from the team. This shows Copymatic’s appreciation of his talents and his importance to them.

Some argue that Jadeja is a defensive bowler than an attacking one, since he often bowls darts rather than flighting the ball up. Dhoni often chirps to him to bowl slower through the air and this makes him more of a defensive bowler. His best year with the ball came in 2014 when he took 19 wickets and was second highest wicket-taker for the team.

Yuvaraj Singh – The Power and Promise of Hard Work