The second match of the International League 2023 will take place on Saturday, January 14 at the Sheikh Zayed Stadium in Abu Dhabi between Sharjah Warriors and MI Emirates. Kieron Pollard, who has been one of the most brutal power hitters in cricket for more than a decade, will be MI’s captain. Muhammad Wasim and Will Smeed make a deadly opening pair.

Andre Fletcher, a right-handed batter, is not the worst of the opening batters either. Najibullah Zadran, Nicholas Pooran, and Pollard make up the powerful middle order. Dwayne Bravo and Samit Patel are not to be underestimated because they have a lot of experience. The bowling unit includes Trent Boult, Fazalhaq Farooqi, and Imran Tahir.

In contrast, the Warriors also have a strong team at their disposal. Rahmatullah Gurbaz and Evin Lewis are two of the world’s most formidable strikers. Captain Moeen Ali, Dawid Malan, and Joe Denly all have the ability to hold an end up and also play big shots.

Mohammad Nabi and Marcus Stoinis give the middle order stability. As spinners, Karthik Meiyappan and Noor Ahmad are formidable prospects. Naveen-ul-Haq has participated in numerous international leagues and has extensive experience.

Both the Warriors and Michigan have potent batting lineups. The chasing team may end up having a significant advantage on a good pitch for bats.

In general, the pitch in Abu Dhabi is good for batting, and it appears that the match will score a lot of runs. However, the surface also provides spinners with a lot of support. After winning the toss, both teams should go with fielding first.

The temperature should be around 22 degrees Celsius, making the playing conditions pleasant. Most likely, the humidity will be in the 50s. 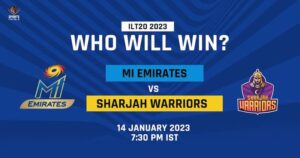