Speedster Anrich Nortje, leg spinner Adil Rashid, and all-rounder Wayne Parnell are among the team’s stars. Aiden Markram will be in charge of Sunrisers Eastern Cape. Additionally, the Eastern Cape is home to talents like Tristan Stubbs, James Fuller, and Marco Jansen.

It is anticipated that Sunrisers Eastern Cape and Pretoria Capitals will be close matches in which Markram and company will seek revenge for their previous defeat.

Throughout the match, the SuperSport Park pitch typically favors quick bowlers. Their efforts are greatly rewarded by the lightning-fast outfield. Overall, fast bowlers will be eager to visit and take bowling because of how quickly the outfield changes.

On January 14, the skies at Centurion would be clear. The most recent game demonstrated that the pitch was favorable for batsmen. The ball will ideally land on the bat, allowing batsmen to execute their strokes. To feel at ease on this surface, the first team must score more than 180 runs.

Viacom18 and Sports 18 will stream the SA20 league in India. The matches will be shown live on Sports18 – 1, Sports18 – 1 (HD), and Sports18 Khel, and viewers will also be able to watch them online on the OTT platform Jio Cinema. 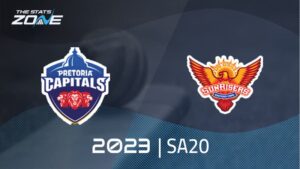