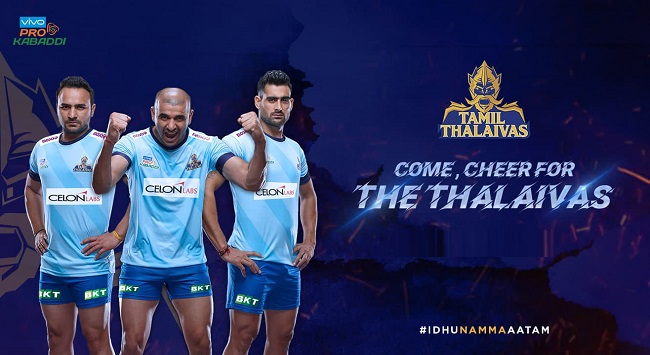 Tamil Thalaivas is a professional and popular franchise-based team where they are set to roll out the matches for the league. The team takes part in the Pro Kabaddi League where the franchise is of Tamil Nadu, India. Check Tamil Thalaivas Squad.

The team is known by the nickname Thalaivas and it is founded in 2017. The league will be taking forward in the league.

The home ground for the club is the Jawaharlal Nehru Stadium, Chennai which has a capacity of 8,000.

Tamil Thalaivas are represented by light and dark blue colors. The Anthem for the team is Namma Mannu Namma Velayattu.

Magnum Sports Private holds the ownership of the team where the head coach is J Udaya Kumar, and the captain is Surjeet Singh Narwal.

Thalaivas is yet to bag their win in the league as it is the most recent tea in the league. Check out more details about the Squads and Schedule for the Pro Kabaddi League 2021 that is season 08 here on this page.

The squads for the league are out now and the matches are set to be rolling out. The organizers and the team management have announced the current squads for the team. The matches will be starting from December 23, 2021.

Tamil Thalaivas will be setting up the fire for another season as they will be rolling out with the matches.

The squads for the league will be setting up their games in the league.