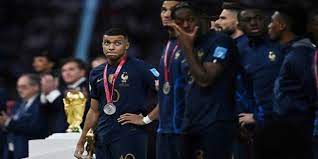 FIFA should look into the offensive mocking of France forward Kylian Mbappe by certain Argentina supporters during celebrations in Buenos Aires to welcome back the World Cup champions, a top French government minister said.

A group of supporters lit a fake coffin lid emblazoned with a crucifix and a photo of Mbappe on fire during Argentina’s joyful return. During a procession of open-top buses across the city, goalkeeper Emiliano Martinez also held a doll baby with Mbappe’s face on it. On social media, pictures of both quickly gained popularity.

The French soccer association and an anti-racism organization will file legal charges against those who called Mbappe and his teammates racist names on social media after their team lost the World Cup final on penalties.

French Finance Minister Bruno Le Maire was asked about the slurs coming out of Argentina on social media. He described them as “undignified” and openly questioned if FIFA should look into the incidents.

An inquiry for comment was not immediately answered by the Argentine Embassy in Paris.

Mbappe, who turned 24 on the day that tens of thousands of people flocked to the streets of the Argentine city to greet team captain Lionel Messi as a hero, led a valiant French comeback by scoring twice in the final 90 seconds to force overtime.

He and other players of African heritage, who make up the bulk of the France side, have faced a barrage of racist comments on social media from a vocal minority of followers. A criminal case filed by the anti-racism organization SOS Racisme against the individuals responsible for the insults included screenshots of more than 100 abusive remarks. Likewise, the French Football Federation has acted.

According to Hermann Ebongue, secretary general of SOS Racisme, “It is the manifestation of a far-right philosophy that claims that these individuals should not be considered French.”

Kingsley Coman and Aurelien Tchouameni, the two players who missed their penalties, received the greatest hatred, he said, and several of the players had disabled the comments on their social media profiles. Racist abuse online carries a maximum sentence of one year in jail and a fine of 45,000 euros ($47,839.50).

Before the tournament began, Argentina fans performed a racist song about Kylian Mbappe and the France squad. SOS Racisme has already requested FIFA to take action against these fans, and it is currently looking for any evidence of racism in the photographs coming out of Argentina.

According to Mikel Arteta, Arsenal will be adding to its roster in January