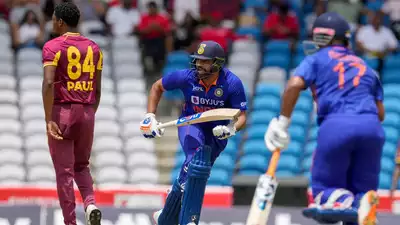 The uncertainty hanging over India: The ongoing Twenty20 series between the Indian cricket team and the West Indies in the United States is in a state of limbo as a result of visa issues.

Cricket West Indies (CWI) is planning to hold the matches in the Caribbean due to visa issues, which has caused the games to be put in a state of limbo. The episodes of the series are now being shown in the United States.

According to an article that was recently posted on the website cricbuzz, the members of both teams have not yet received their visas to enter the United States.

As a result, the CWI has been forced to devise an alternative plan in order to allow them to compete.

According to the source, many players on both the Indian and West Indies teams do not yet have their travel documents for the United States. The games were supposed to take place on August 6 and 7 at Central Broward Park in Lauderhill, Florida in the United States.

The publication quotes an anonymous source within West Indies cricket as claiming that playing the games in the Caribbean is “not unlikely,” and that efforts are currently being made to find a solution to the problem of visas.

“The first information suggests that the players would be provided with the passports and other travel documents required to enter the United States at St. Kitts, which is the location where the teams have landed.

In addition to this, the CWI reaffirmed that there is a lack of transparency over the Florida games.

On the website of the organisation, Ricky Skerritt, who is the president of the CWI, is reported as saying that “there are options being investigated as we continue to seek the prospects of securing the outstanding visas.”

At this point in the five-match series, India has a 1-0 advantage, and the next two matches are set to take place back-to-back in St. Kitts on August 1 and 2.