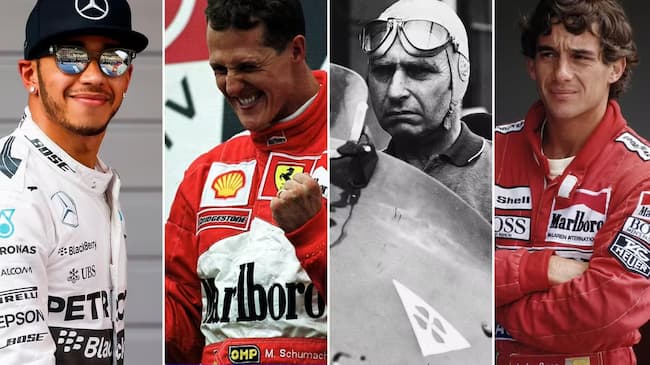 For those who are in love with tremendously high speed, and the adrenaline rush that can be received from it, racing is always the most favorite of all sporting events. Car races are also the ultimate hub of the top cars with the best designs and technologies and the greatest speeds. F1 is the pinnacle of the car races. Check Top 10 Best F1 Drivers of All Time 2022.

That is why car lovers who are also adrenaline junkies are in love with F1 Car race tournaments. The blood rush that fans get from watching drivers swish through the track as they compete with each other.

Racing drivers have nerves of steel, as they risk their lives and let the world around them turn into a blur while racing to the finishing line, or as they smash their cars into the walls or each other. It is this fearlessness that attracts so many people to them.

Check out the 10 best F1 drivers of all time

It might seem an intrinsic part of F1 today, but Jackie Stewart was one of the first drivers to prove that racers can, and should, strive for better safety standards. As a triple champion and dominant force in the sport, Stewart had the credibility needed to change the culture around safety in motorsport.

After seeing too many of his friends and colleagues killed doing what they loved, Stewart was a key pioneer in the introduction of full-face helmets, seatbelts, traveling medical units, safety barriers, runoff areas, and more.

Outside his quest for safety, Stewart was a prodigious talent on the track and was the man to beat throughout his time on the grid, claiming three world titles with Ken Tyrrell’s eponymous team as the two formed an irrepressible double-act in the late 1960s and early 1970s.

Jim Clark shunned the limelight and was only interested in winning. From 1962-65, the Scottish ace was arguably only beaten in the world title when he encountered mechanical issues and at the time of his death in 1968 – tragically during an F2 race at Hockenheim – he held the record for the most race wins.

An unrivaled talent, Clark was eight miles clear of the nearest competitor in the torrential rain at Spa in 1963, highlighting the bravery of a driver racing in the most dangerous period of motorsport’s history.

Nigel Mansell was another one of Formula 1’s ‘unlucky’ drivers. His career was dogged by reliability issues, and his entire 1988 season consisted of two second-place finishes, two races missed due to chickenpox, and 12 retirements.

He managed to finish in second place in the championship three times – missing out on the title by two points in 1986 – and as he entered his 12th full-time season in Formula 1, it looked like he might go down as yet another brilliant driver to miss out on the title. Thankfully for the Brit though, this didn’t happen.

Mansell took five consecutive wins to start the 1992 season, going on to claim four more and taking an additional three second-place finishes. This was enough for him to take the title at the age of 39 years old, becoming the fifth-oldest person to do so.

Niki Lauda entered Formula 1 as a pay driver, though nobody can deny that, while his money helped him enter F1, it’s his talent that kept him there.

With three seasons in F1 under his belt, Lauda joined Ferrari for the 1974 season and secured two wins and fourth place in the championship for 1974, having often set the pace but suffered misfortune. In 1975 Lauda took five wins and the first of his three world titles, but it’s his 1976 season – and the infamous Nurburgring crash – that’s his most famous.

He bounced back from a life-threatening crash at the Nurburgring to miss out on the title by one point to James Hunt. He took his second title in 1977 and retired two years later, only to return with McLaren in 1982. That yielded a third crown in 1984, after an epic contest with Alain Prost, before Lauda retired for good at the end of 1985.

While he proved his talent on the track, he later became known for his business sense of it. He worked in managerial positions for Ferrari and Jaguar, though he’s most well-known for his part in Mercedes.

He was instrumental in bringing Lewis Hamilton to Mercedes for the 2013 season and worked with the team until he passed away in 2019.

Fernando Alonso is a two-time world champion with a reputation as a fearless, aggressive racer, though his career can be defined as much by what didn’t come as the two titles he won.

The Spaniard spent three years in Formula 1 before scoring the first of his two consecutive crowns, taking the title with a comfortable 21 point lead over Kimi Raikkonen. His second title the year later was a 13-point lead over the great Michael Schumacher.

A move to McLaren in 2007 to partner rookie Lewis Hamilton saw him finish the season in third, just one point behind winner Kimi Raikkonen and behind Hamilton. His 2010 move to Ferrari looked like it would pay off as he entered the final race of the season in the lead, but a combination of him getting stuck behind Vitaly Petrov and a win for Sebastian Vettel meant Alonso had to settle for second. He missed the 2012 title by just three points (again to Vettel) and was second again in 2013 (though was 155 points the German).

He moved back to McLaren in 2015 and after four tough years he left at the end of 2018 – just before McLaren made their way back towards the front of the grid.

Even the 2021 season has been unkind to Alonso – racing for the midfield Alpine team he secured fourth place at the 2021 Hungarian Grand Prix while his teammate Esteban Ocon went on to win, though a long-awaited 98th podium finally in Qatar.

Despite the terrible luck that Alonso has exhibited in Formula 1 he’s still taken 32 wins, 22 pole positions, and 23 fastest laps, and is a firm fan favorite.

It was Alain Prost’s meticulous style that allowed him to go up against Ayrton Senna – the bitter feud that he is best remembered for. His secret weapon was brainpower, as well as speed, and he possessed a natural precision in his driving that allowed Prost to become France’s first world champion in 1985.

In 1987 he beat Jackie Stewart’s record of 27 wins and a year later McLaren won 15 out of 16 races across the season, which is testament to both Prost and Senna’s skill. Prost remained at the top of his game until his retirement, taking his fourth and final title for Williams at 38 years old.

One of motorsport’s most legendary figures, Ayrton Senna remains the benchmark for raw talent and charisma.

His depth of commitment to a lap and his constant desire to push the boundaries for more has meant that Senna has a special place in the hearts of many motorsport fans. His three titles give a sense of what could have been had he not died at the San Marino Grand Prix in 1994. A combination of natural speed and restless ambition gave Senna an edge rarely seen.

Many drivers not only of the current generations but also before them including Lewis Hamilton. He considers Ayrton as his idol while Schumacher cried in the press conference when he equaled his record of 41 wins in the 2000 Italian Grand Prix. This shows the kind of impact he had on racing.

While his form in Formula 1 isn’t what it once was, there was a time when Sebastian Vettel was virtually unbeatable.

Vettel’s F1 career started in 2007 and, in his first three years, he took nine podiums and five wins, though this was nothing on what was to come. Over the next four years, he became the face of F1, winning four consecutive championships and becoming the youngest world champion in the process (taking the accolade from Lewis Hamilton).

Unfortunately for Vettel, the regulation changes in 2014 didn’t suit Red Bull (or him), and the team quickly fell back through the pack. He went from nine consecutive wins in the final nine races of the 2013 season to not winning a single race until 2015, and since that 2013 season, he’s ‘only’ taken 14 wins.

Despite that, he’s still widely regarded as one of the best drivers on the grid, and his list of records is likely to stand for many more seasons.

When considering the best F1 driver, Michael Schumacher immediately springs to mind. He was, until the rise of Hamilton, the face of domination in Formula 1: seven titles (five of them consecutive), a seemingly insurmountable number of wins, unrelenting competitiveness – Schumacher changed the game in F1 with his combination of dedication, passion, and, of course, raw talent.

While he took two titles with Benetton, he’s far more well-known for his time with Ferrari. He joined the team in 1996 and, after some highs and lows in the following years, the combination struck gold in 2000. What followed in the next five years were five world titles, 48 wins, and a record book that had Michael Schumacher’s name in almost every field.

His second stint in F1 wasn’t as successful as his first, yielding a single podium to add to his collection. However, his 91 wins, 155 podiums, and 68 pole positions still put him high up in any statistical analysis.

In terms of career wins and total career points, Lewis Hamilton is the best Formula 1 driver to have ever graced a circuit. The Britain racer has taken wins in 30 different countries, won a race in every season he’s competed in, and is currently tied on world championships with Michael Schumacher.

Hamilton holds many of Formula 1’s records and, with a contract that runs to the end of 2023, he looks to be able to push even further ahead on many of them.

While he missed becoming champion in his first season by a single point, he became the (then) youngest world champion the following year. Thirteen years later he’s secured six more titles and is fighting for an eighth.