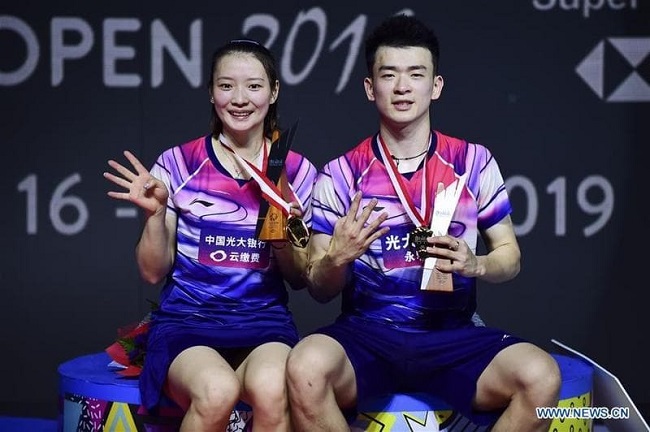 Badminton is one of the most famous sports across all over the world it is an outdoor activity and nowadays mixed double sports have grown very much and the badminton double pair consists of one man and one woman. This variation of competition is prominent in tennis, racket sports, and badminton, Here are some of the best Top 10 Mixed Doubles Badminton Players in the world list you can check below. So check the Top 10 Best Mixed Doubles Badminton Players.

Zheng Siwei and Huang Yaqiong are the Chinese duos they made their partnership in November 2017 and since then they are one of the best duos they hold the record of 146 victories and 15 defeats and they have also won many titles like; Best Mixed Double players in the word, In 18/19 year they have crowned World Championships and they have also won gold in Asian games in total they have won 15 championships in BWF World Tour 2, BWF Superseries and 1 BWF title in Grand Prix.

Dechapol Puavaranukroh and Saprise Taerattanchai are the second famous duos with 176 victories and 69 defeats and in 2019 they have won a silver medal in BWF Worlds and in 2017 they have won the South Asian Games. Also, the duo has a great year by winning all the three Championship titles they have won six World Tour Championship and one Grand Prix in their career.

The other duos from china also make a great pair together they have a record of 151 wins and 39 defeats they have also won many championship titles together as they have worked hard for their Victory. In 2018 they have won World Tour BWF and also the Silver Medal and in the year 2018/19 they won gold in Asian Games they both have a record of winning six world tour together, 1 Super Series title, and one Grand Prix.

Praveen Jordan and Melati Daeva Oktavianti mixed double pairs are from Indonesia they have a record of 78 wins and 45 defeats and currently in the year 2019 they made up to the gold medal at South East Asian Games. Currently, in 2020, they have won England open also has won three times World tour titles.

Yuta Watanabe and Arisa Higashino are Japan Duo they have a great record of 119 victories and 60 defeats in the England open they have won twice. In 2019 they have won the Bronze medal in BWF. The partnership duo has won 5 titles of the world tour, and one title of International challenge.

Seo Seung-Jae and Chae Yoo-Jung are from South Korea they are the sixth duo who play the best badminton as the double players they have a record of 73 wins and 31 defeats. Unfortunately, in recent times they lost the final of BWF World Tour and they have won the World Tour Championship title 3 times not only this in the year 2018 they won the Super 300 Australian open the very first ever BWF tour title.

Chan Peng Soon and Goh Liu Ying are from Malaysia they have one of the highest records of winning 300 wins and 167 defeats. In the Rio Olympics, they have won a silver medal in the year 2016 they were representing their own country and in 2018 they won Bronze Medal in the Commonwealth games. The duo have won 1. four titles of World Tour Championship 2. 1 Superseries Title 3. 5 Grand Prix Title 4. 1 International Challenge/Series together.

Marcus Ellis and Lauren Smith are the duos who play from England they have a record of 129 victories 55 defeats, the duo has earned a gold medal at the 2019 European Games and Silver Medal at the Common Wealth Games. The pair recently went to European Championship. The Duo has won many championship titles together with 5 World Tour Championship and 1 Grand Prix Title.

Hafiz Faizal and Gloria Emanuelle Widjaja have been rank 9th on the BWF list the duos have a record have 83 wins and 57 defeats, they also worked hard and try their best performance they have one Indonesia World Tour title and during in the year 2018 Super 500 Thailand the Indonesia team won the first BWF title.

The last duo of BWF list Thom Gicquel and Delphine Delrue the french duo have a record of 105 victories and 60 losses they both make a great pair and in the year in the European Games, they lost semi-finals against Marcus Ellis and Lauren Smith. In total, they have won two World tour Championship and three International challenge/series titles altogether.