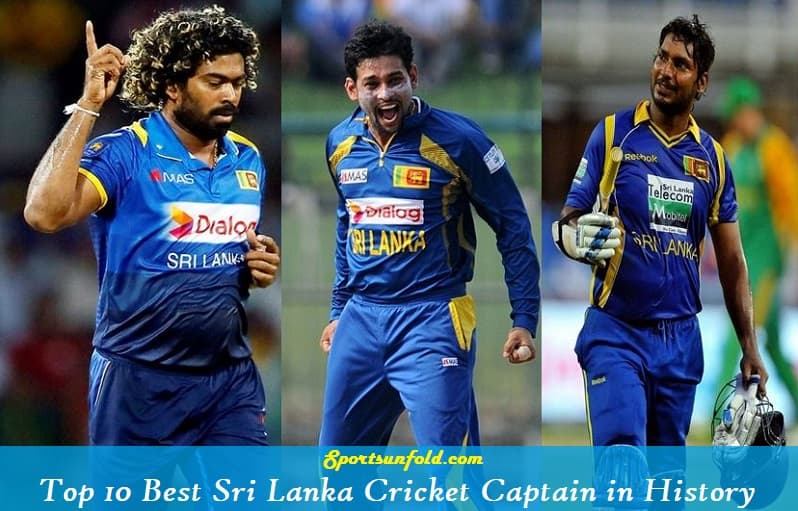 Cricket is one of the most popular sports in Sri Lanka is one of the twelve nations that take part in test cricket and one of the six nations that has won a cricket world cup. In the year 1990′ Sri Lanka has achieved a huge success in the beginning. The Sri Lanka team reached the finals in 2007 and 2011 Cricket World Cup consecutively but they ended up being runner-ups but the team currently holds several world records, including the world record for the highest team total in Test Cricket. So now let’s check the Top 10 Best Sri Lanka Cricket Captain.

ALSO READ: Top 5 Batsmen With Most Not-Outs In IPL History

Sanath Jayasuriya is a former Sri Lankan cricketer and a former captain of the Sri Lanka national team, he is one of the greatest attacking batsmen of his era. Sanath is well known for his powerful striking and match-winning all-round performance in ODI cricket. Ever Since he stepped into international cricket, he has become the strongest pillar of Sri Lanka also he is one of the most stylish batsmen.

Kumar Sangakkara is a Sri Lankan cricket commentator, former professional cricketer, and the current president of Marylebone Cricket Club who is widely regarded as one of the greatest batsmen in the history of the sport and has been among the top 3 batsmen in ICC ranking across all three formats of the game at the various stage during his international career. Kumar is one of the best batsmen, wicketkeeper, and a fine leading Captain of Sri Lanka.

Muttiah Muralitharan is a Sri Lanka cricket coach, former professional cricketer, businessman, and a member of the ICC Cricket Hall of fame. He is regarded as the greatest and most successful bowler in the history of international cricket, he is the only bowler to take 800 test wickets and 530 + ODI. Without him, Sri Lanka wouldn’t win any matches between the years 1995 to 2011.

Lasith is a Sri Lanka cricketer 2014 T20 World Cup-winning side, he is the only bowler to have taken 4 wickets in 4 consecutive balls in international cricket two times. He is one of the most successful limited-over bowlers he is one of the simplest and honest players the term is very lucky to have a player like him. No doubts that Sri Lanka has one of the best players with them.

Tillakaratne Dilshan is a former Sri Lanka cricketer and former captain of the Sri Lanka national cricket team, he is one of the most innovative ODI batsmen of all time he is the rare example of a cricketer with notable skills in all aspects of the game who can bat, bowl, field, and keep wicket. He made his Test and ODI debut during the Sri Lankan cricket team’s tour to Zimbabwe in 1999.

Mahela is a Sri Lanka cricket coach and a former cricketer regarded as one of the greatest batsmen in the history of cricket, he is one of the most successful captains of Sri Lanka along with Sanath. He made his test cricket debut in August 1997 and his One Day International (ODI) debut the following season in January 1998. He is one of the best batsmen ever and he is a great role model for all upcoming young generations.

Nuwan Kulasekara is a former Sri Lankan cricketer who played for the Sri Lanka national cricket team in all three formats of the game. He is one of the best swing bowlers in world cricket. He is also a key member of the team that won the 2014 ICC World Twenty20 and was part of the team that made the finals of the 2007 Cricket World Cup. He is very innocent but very talented.

Dinesh Chandimal is a professional Sri Lankan cricketer is the former captain of all formats, he is the first captain to lead Sri Lanka in their first day-night test match. He is the true champ behind the 2014 T20 World Cap, he always shows his sportsmanship spirit and also has a very kind and humble nature. “He is a great cricketer in Sri Lanka. Dinesh is better than Malinga as the T20 cricket captain in Sri Lanka. One day he will be the greatest cricketer in our country. ‘All The Best! and I Love you.’ “

Aravinda De Silva is a former captain, he has also played in English country cricket, he is one the greatest batsman a Sri Lanka could have is the only player to make a hundred and take three or more wickets in a World Cup final. He is the very first man to score unbeaten hundreds in Test that is 138 and 103 against Pakistan in the 1990s.

Marvan is a Sri Lanka cricket coach and former who have played tests and ODI for a long period of time he is considered as one of the most technically sound batsmen. He also has scored six double centuries in Test Cricket for Sri Lanka and in ODI runs he has a score of 8529, he is also popularly known as ‘Marlon Kandamantu’